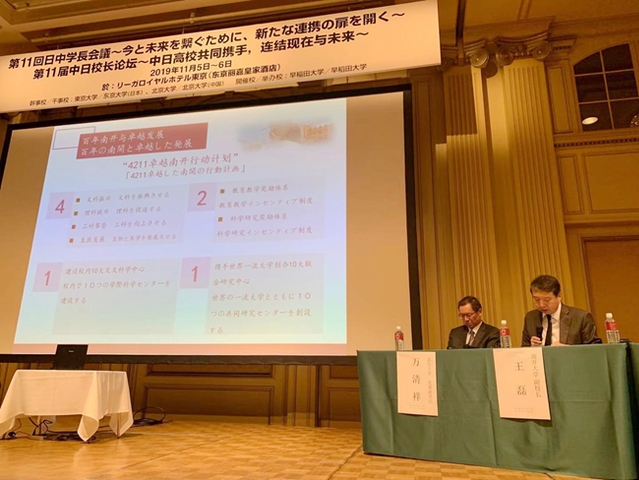 November 5-6, initiated by Ministry of Education, China, and Ministry of Education, Culture, Sports, Science and Technology, Japan, the 11th Sino-Japan University Presidents Forum was organized by Waseda University and held in Tokyo, Japan. Based on reality and targeting at the frontier, the forum attracted more than 150 presidents, experts, and scholars from 48 China and Japan universities. Nankai University’s Vice President Lei Wang was invited to the forum and gave a speech. Officials at Office of International Academic Exchanges accompanied during the visit.

In the forum, Prof. Lei Wang gave a speech entitled with “100-year-old Nankai: Seizing the Development Opportunity and Promoting the World-class Construction”. He pointed out that the academic excellence is the top pursuit of academic value for the universities. Nankai University keeps a foothold in China and serves for the whole world. In a cultural-integrated and excellence-oriented way of development, Nankai will initiate the “4211 Nankai Action Plan” in the next 100 years, continuously contributing to the country’s and the world’s development. After the forum, Prof. Lei Wang visited Aichi University. During the meeting, both sides recalled the friendly cooperation between two universities and agreed to deepen the relationship in the future.

(Written by Lu An, Translated by Yuchen Shi, Edited by Davide Francolino and JianjingYun)