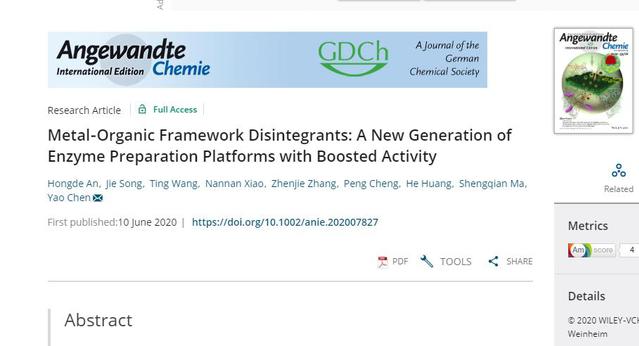 Because of its high efficiency and specificity, the enzyme is widely used in medicine, food, light industry and other fields. Thus the invention of high-performance enzyme preparation can be the “engine” to realize green biological manufacturing and sustainable development. However, in the catalytic process, enzymes often need the participation of activators such as metal ions, which can cause problems for enzyme stability and greatly affect the performance of the enzyme. How to utilize activator efficiently and realize enzyme stabilization is a key scientific problem in the field of enzyme preparation.

Researcher Yao Chen’s research team of Nankai University’s School of Pharmacy and State Key Laboratory of Medicinal Chemical Biology provided a brand-new plan: they created a new generation of crystal enzyme preparation platform via an in-situ assembly of metal activator and enzyme, which not only realized the precise and efficient activation of activator to enzyme, but also achieved the stabilization of the enzyme, and greatly improved the efficiency and operability of biocatalysis. Recently, the paper introducing this work has been published on the international academic journal “Angewandte Chemie International Edition”.

Due to factors such as the contact of the activator with the enzyme, the compatibility with the reaction system, the mass transfer and the environment, if the activator such as metal ions is directly added to the biocatalytic system, the catalytic efficiency of the enzyme is often not satisfactory. In addition, the weak stability of the enzyme is also one of the key factors hindering its industrial application. How to overcome the challenges above and develop new and efficient enzyme preparation technology is of great significance. 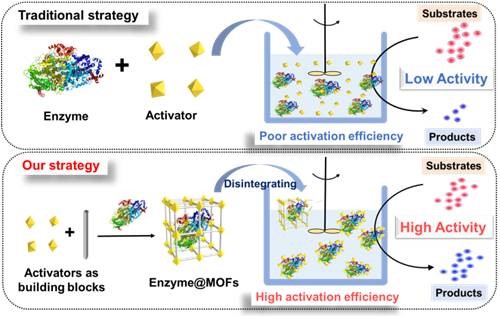 The team used metal activators (Mn2+, Co2+, Zn2+, Ni2+), squaric acid ligands and enzymes to self-assemble in the aqueous phase at room temperature to form a solid crystalline enzyme @MOFs complex (MOFs, Metal organic Framework). Through powder diffraction, infrared and laser confocal microscope and other technical means, it was confirmed that the enzyme can be efficiently and quickly loaded into the MOF and showed a regular distribution. 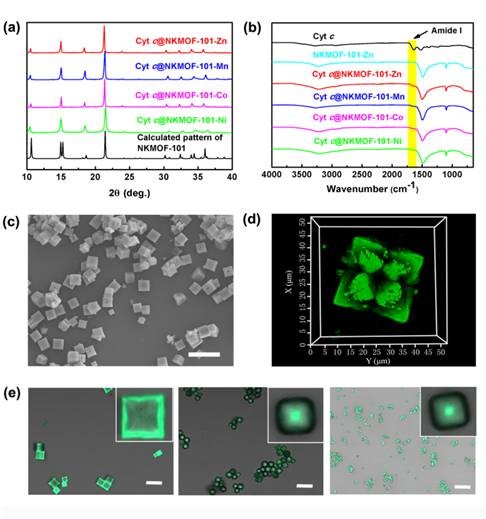 MOFs not only form a regular protective layer around the enzyme, but also the metal activators can be evenly distributed around the enzyme. The good solubility of the synthesized MOFs makes it act as “disintegrants” in the process of enzyme catalysis. At the same time, the enzyme and the activator are released into the reaction system. During the co-release process, the two are fully contacted to activate the enzyme molecule.

Results of the research have been applied for patent protection. The paper introducing this work has been published on “Angewandte Chemie International Edition”. Yao Chen is the only corresponding author and Hongde An from Nankai University’s School of Pharmacy is the first author.