Mercury is a highly toxic element in ecosystems even at an extremely low concentration. Therefore, developing efficient methods to efficiently detect Hg2+ that allow sensitive and selective assays in aqueous media is in urgent demand. Fluorescent detection techniques for determination of metal ions are one of the best methods owing to the high sensitivity, portability and low cost. Furthermore, porous phosphonate-based organic-inorganic hybrid materials have brought novel and amazing physicochemical properties due to the integration of superiorities from both inorganic components and organic moieties.1-2 Herein, mesoporous cerium phosphonate nanostructured hybrid spherical (CeP-NS) fluorescent probes are prepared with the assistance of cationic surfactant cetyltrimethylammonium bromide while using ethylene diamine tetra(methylene phosphonic acid) as the coupling molecule.3 The resulting hybrid is constructed from the cerium phosphonate nanoparticles, accompanied with high specific surface area of 455 m2 g-1 (Figure 1). 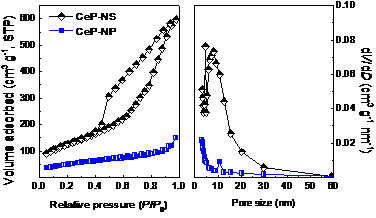 The fluorescence emission spectra of the synthesized materials in the presence or absence of Hg2+ were recorded to evaluate the corresponding quenching ability. Figure 2 shows that the cerium phosphonates exhibit strong emission peaks centered at 352 nm, correspoding to the spin–orbit splitting of the ground state of Ce3+. Remarkably, the CeP-NS material constructed from the aggregation of hybrid nanoparticles with well-developed mesoporosity and high surface area, can significantly enhance the absorption efficiency of the excitation light and promote the quantum confinement effect, which leads to much stronger fluorescence emission as compared to that of cerium phosphonate nanoparticles (CeP-NP). 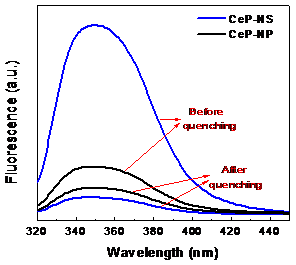 Figure 2. Fluorescence emission spectra of CeP-NS and CeP-NP before and after Hg2+ quenching (λEX = 300 nm).

The fluorescence quenching kinetics was investigated to find the suitable reaction time between Hg2+ and the cerium phosphonates (Figure 3a). According to the experiment, the fluorescence intensity decreases gradually in the first 50 min and reaches equilibrium with further prolonging the reaction time. The limit of detection (LOD) of the cerium phosphonate nanostructured hybrid spheres for Hg2+ detection, calculated on the basis of Stern-Volmer equation (Figure 3b), was 16 nmol L-1, which is lower than the toxicity level of Hg2+ in drinking water (30 nmol L-1) defined by World Health Organization (WHO). The present organic-inorganic hybrid probes more sensitive than that of state-of-the-art sensing systems reported to date in terms of LOD, e.g., BSA-protected Au nanoclusters (80 nmol L-1) [Analyst 2010, 135, 1411.] and cysteine-functionalized Ag nanoparticles (65 nmol L-1) [Biosens. Bioelectron. 2009, 25, 269.].

The fluorescence response of the CeP-NS in the presence of interferential metal ions was examined to test the selectivity of the present sensing platform. The corresponding fluorescence intensity variation of the CeP-NS towards a variety of common metal ions is shown in Figure 4a. Negligible interference upon the addition of Na+, K+, Mg2+, Ca2+, Sr2+, Ba2+, Zn2+, Co2+, Cd2+, Pb2+, and Cu2+ (with the same concentration as Hg2+) can be observed implying that the fluorescent mesoporous cerium phosphonate material possess excellent selectivity towards Hg2+ sensing. On the other side, possible interference from common anions was investigated. Figure 4b demonstrates that there is little change in the emission in the presence of Hg2+ with the coexistence of L-1 F-, Cl-, NO3-, ClO4-, HCOO-, CH3COO-, SO42-, HPO42- and PO43- as compared to that in the presence of single Hg2+. These results suggest the potential applicability of the present mesoporous cerium phosphonate for the Hg2+ detection in real samples. Therefore, a novel and attractive label-free fluorescent sensing paltform for the detection of Hg2+ in aqueous system has been developed on the basis of mesoporous cerium phosphoante hybrid nanostructured spheres.

To conclude, mesoporous cerium phosphonate hybrid with well-structured micromorphology has been prepared through a facile hydrothermal method with the assistance of cationic surfactant. The spherical cerium phosphonate material that possessed high specific surface area is confirmed to be consisted of homogenesously linked inorganic cerium units and organophosphonic linkers. The resultant inherent photoluminescence property and organic functionalities make it a novel optimal platform for Hg2+ detection with excellent sensitivity and selectivity, and a limit of mercury ions detection of 16 nmol L-1 is determined. These results have an important significance for developing the applicable scope of lanthanide-based phosphonate fluorescent materials and structural sensors. We suggest that the label-free cerium phosphonates with promising biocompatibility can be used in research of new luminous materials in the areas of medical diagnostics, cell biology and sensing devices for ion detection.