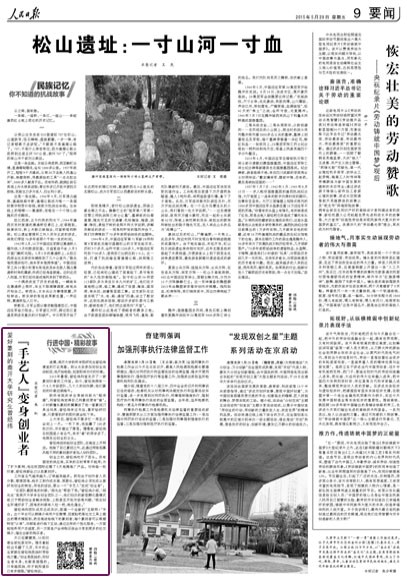 Zeng Jingwei, postgraduate student atthe College of Software, Nankai University, was still awake even though it waslate. Just returning to his dormitory from Beijing, he had to check and packthe seals immediately.

Zeng Jingweiopened a seal-cutting studio with his roommates in the summer holiday in 2013. Withan 8-people marketing team and dozens of creators, they have expanded theirseal business overseas.

Students from theCollege of Software are often nicknamed as “program apes”, but Zeng Jingweigrew more of a connection with seal cutting. His seal-cutting fanatic unclegave him a set of cutting tools as toys, and Zeng Jingwei himself learnedcalligraphy and cutting patterns, which inspired him to explore more of sealcutting.

After entering college, however busy he was, Zeng Jingweiwould always spare one day a week to concentrate on seal cutting. He facsimiledover 100 Han seals in more than one year and improved his skills and fame. Withthe increasing number of admirers, he decided to start him own business.

He organized a startup team and opened an online shop onTaobao. Apart from processing the seals by himself, he recruited seal lovers ofdifferent cutting styles through the Internet to form a creation team.

Zeng Jingwei encounteredloads of challenges at first: no stationary suppliers meant few stone materialscould be used. He even set up street stalls beside the campus for three days topromote his products, on which he concentrated to make them perfect.

The orders grew with thereputation of his workshop, and the time consuming management, high cost andlong processing cycles compelled him to transfer seal cutting from hobby toentrepreneurship, namely, craftsman to entrepreneur.

“Mr. Chuang gave me ahand at the toughest time.” The Mr. Chuang, mentioned by Zeng Jingwei, is oneof the student’s innovation and pioneering teams in Nankai University, andtheir new incubator model can help entrepreneurs to solve problems such assubmitting accounts, paying taxes and opening up markets. He said they “canpull you out of the dark abyss.”

Zeng Jingwei has agreed with his team to build a brand new “Internet+”platform to track potential customers’ needs on social media and push tooffline carvers. The creators can interact with customers and provide personalservices, which can promote customer loyalty and attract more purchasers.

By dawn, Zeng Jingwei has packed all55 seals. When reading the books put beside his pillow, he said theentrepreneurs in the book would always give him strength when feeling alone: “Entrepreneurshipis lonely, but entrepreneurs are strong. The lonelier you are, the stronger youare.”