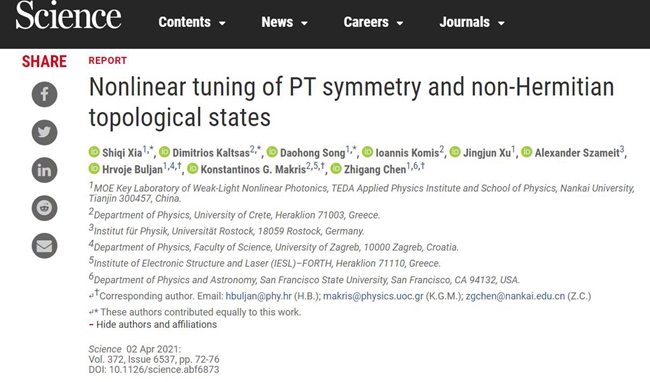 There are many magical space-time symmetries present in the universe. Some of those countless novelties originate from the topology of the structure of the universe, some from the nonlinearity of the material, and other from the “Parity Time (PT) Symmetry” that can realize  space-time symmetry concurrently. However, it is very difficult to find a natural material or a physical-existing material system with multiple properties in nature. How to experimentally construct artificial complex systems that have multiple properties and open the window to explore the wonders of nature has become a frontier topic in physics and related interdisciplinary research today.

The research group led by Professor Chen Zhigang and Professor Xu Jingjun from the School of Physical Sciences and the TEDA Institute of Applied Physics of Nankai University, in collaboration with groups from the University of Zagreb in Croatia, the University of Crete in Greece, and the University of Rostock in Germany, established a nonlinear and non-Hermitian topological photonics platform for the first time in the world. They have also realized the tuning of PT symmetry and topological states using nonlinearity in optical systems. The team also discovered the antagonistic effect of sensitivity and robustness of topological states in the non-Hermitian regime when it approaches the singularity that determines PT symmetrical breakage, and the principle of manipulation of the overall system of PT symmetry through local nonlinearity. This innovation changes the understanding of nonlinear effects in open topological systems and breaks new ground in the research of nonlinear topological photonics and its related frontiers. The research results were recently published in the international journal Science with the title of “Nonlinear tuning of PT-symmetry and non-Hermitian topological states”.

In recent years, topological photonics and non-Hermitian optics have become two of the most active and emerging research areas in photonics. The concept of topology has been extended to the fields of optics, acoustics, metamaterials and cold atomic systems, which has greatly contributed to the development of topological physics. On the other hand, the concept of non-Hermitian comes from quantum mechanics, and it is generally believed that non-Hermitian systems have no measurable intrinsic energy with physical meaning, while the introduction of PT symmetry has changed the traditional understanding of the standard of the energy conservation of non-Hermitian open systems.