On April 22, the Academician and Expert Achievement Exhibition and Transformation Center of the Chinese Academy of Engineering, jointly established by the Chinese Academy of Engineering and the Shanghai Municipal People’s Government was officially inaugurated in Jiading District, Shanghai. The Academician and Expert Achievement Exhibition Hall was opened on the same day. The research achievement of the team of Academician Li Zhengming from Nankai University, “A Super-efficient Herbicide for Millet-the Creation and Development of Monosulfuron (Guyou)”, was selected into the opening exhibition of the Transformation Center. 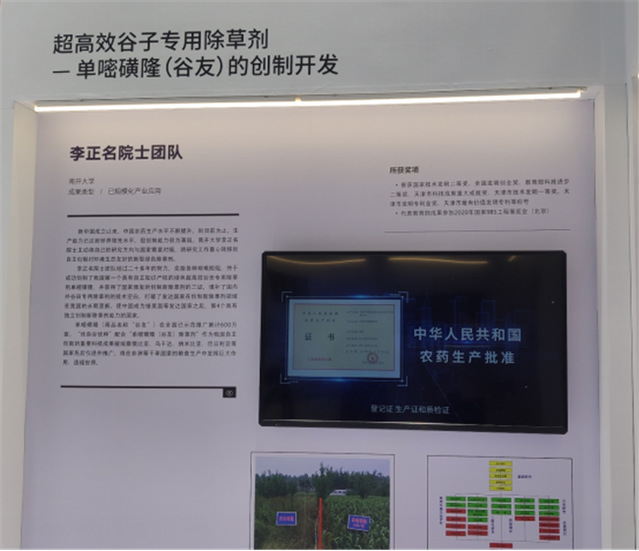 According to reports, this exhibition focuses on innovation and emerging industries, presenting the breakthrough achievements and original major fruits made by academicians in core technology research in the past years. The first phase of the exhibition covers an area of 12,000 square meters. In the Achievement Exhibition Hall, more than 300 research results from a total of 200 academicians and expert teams were exhibited, including over 100 consulting achievements and 204 scientific and technological outcomes. Among them, 95 scientific and technological achievements have been first released, and 88 of them being put into industrialization. 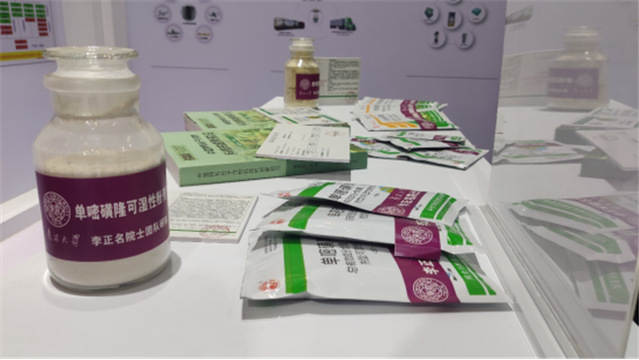 In the 1990s, the team of the Academician Li Zhengming initiated the creation and research of new sulfonylurea herbicides. After a long-term basic research, they found out for the first time that a new structural molecule containing a mono-substituted pyrimidine ring showed excellent efficacy. After more than 20 years of hard work, the team has overcome various difficulties and obstacles, and successfully created monosulfuron, which is the first green and super-efficient herbicide for grain fields with independent intellectual property rights. They also obtained three certificates by the state to create new herbicides, filling the technical gap of special herbicides for grain fields at home and abroad. Monosulfuron broke the long-term monopoly of developed countries in China in terms of new herbicides. After the United States and other developed countries, China has become one of the few countries with the ability to independently create new herbicides.

The team of Academician Li Zhengming has long been committed to the basic theoretical research of herbicide creation, the creation of new herbicide varieties and the R&D of green technology. Based on the manufacture of herbicide, it serves agricultural production and strongly support the establishment of the national food security system.

In 2017, Nankai University exclusively transferred the green manufacturing technology of monosulfuron to Hebei Xingbai Pharmaceutical Group Co.,Ltd. and put it into market in order to boost the coordinated development of Beijing-Tianjin-Hebei region and promote scientific fruits to the market to better serve farmers. At present, monosulfuron has been demonstrated and widely promoted in China, with a total area of 6 million mu. Together with its golden partner “Zhangzagu Superior Seed”, monosulfuron has helped Hebei, Shanxi and other provinces to fight poverty and to achieve targeted poverty alleviation. As an important scientific and technological achievement of China’s independent innovation, monosulfuron (Guyou) herbicide, together with “Zhangzagu Superior Seed”, has been introduced and promoted in Ethiopia, Uganda, Namibia, Nigeria and other countries, playing an important role in the food production of arid countries in Africa and other countries.