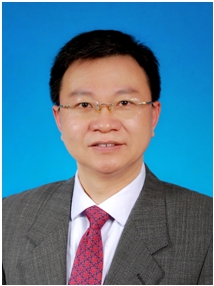 Yan Chunhua serves as an academician and is an inorganic chemist. He was born in Shanghai in January,1961, while Rugao in Jiangsu Province was his native place of ancestral origin. He graduated from College of Chemistry and Molecular Engineering of Peking University in July, 1982, where he received the degree of master and doctor in July, 1985 and January, 1988. Then he worked there since February, 1988 and served as Lecturer (1988), Associate Professor (1989), Professor (1992) and Distinguished Professor of Ministry of Education (1999) in College of Chemistry and Molecular Engineering, Peking University. In addition, he was elected as the Academician of Chinese Academy of Sciences and the Academician of the World Academy of Sciences in 2011 and 2012 respectively. In 2016, he was elected as the member of Standing Committee of CPC and Associate President of Nankai University. In 2017, he assumed the President of Lanzhou University. In 2018, he assumed the Director of Research Center of Rare Earth and Inorganic Functional Materials (Rare Earth Center) at Nankai University.

He works on the theory of rare earth separation and its related industrial application as well as the study of rare earth functional materials. Also, he developed the optimal design approaches to theory of countercurrent extraction and the process of rare earth separation. As a result, he realized the large-scale industrial production of high-purity heavy rare earths. He also came up with the design and control methods of linkage extraction technology. Furthermore, he established controllable preparation of Rare-earth nano-crystalline, and worked on the basic quality such as luminescence and catalysis. In addition, he developed bioimaging and biocatalysis technologies of Rare-earth nano-crystalline. Moreover, he was the winner of the National Science and Technology Progress Award (2nd prize), National Natural Science Award (2nd prize) and so on.