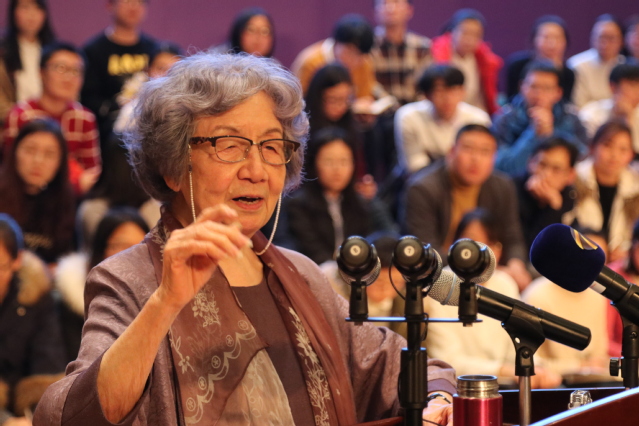 Professor Yeh Chia-ying was born in 1924. After graduating from Department of Chinese Language and Literature, Fu Jen Catholic University in 1945, she has been working at National Taiwan University for 15 years since 1954, during which she worked as a full-time Professor at National Taiwan University and Adjunct Professor of Tamkang University, Fu Jen Catholic University. In 1969, she moved to Vancouver, Canada, serving as Tenured Professor of the University of British Columbia. In 1991, she was awarded the title of “Member of the Royal Society of Canada”, which made her the only member in terms of Chinese classical literature in the Society. Besides, she also received the degree of Honorary Doctor at Lingnan University, Hong Kong and University of Alberta, Canada. At present, she assumes the Director of Research Institute of Chinese Classical Culture at Nankai University and Librarian of China Central Institute for Culture and History.

Professor Yeh Chia-ying takes Chinese classical poetry as her lifetime career, thus she has nurtured plenty of talents in terms of the Chinese classical poetry. Most of her students have been the renowned Professor and Academic Leaders at many universities in Canada, America, Hong Kong Special Administrative Region and Taiwan Province of China. In order to promote traditional Chinese culture and support the development of the students who are fond of classical literature, she had established Research Institute of Comparative Literature in China (renamed as “Institute of Chinese Classical Culture”). Also, she donated half of her pension to establish Yeshi Tuoan Scholarship and Yongyan Academic Fund for the dissemination and research of Chinese classical culture so that the country can attract and training more talent to study classical Chinese literature. Her enthusiasm touched many of her friends in Canada and Macao Special Administrative Region. As a result, they supported her career by sending a generous donation to Nankai University.

Her major publication in English was Studies in Chinese Poetry published by Harvard University Asia Center. In addition, she has published many scholarly works, almost all in Chinese, including nearly 20 Chinese masterpieces such as Wang Guowei and the Associated Literary Criticism, Book of Lingxi Poetry, Modern Insights into the Study of Chinese Poetry, Diverse Reviews on the Chinese Poetry throughout History, Selected Analysis of Qing Poetry. In 1997, Hebei Education Press published the Anthology of Yeh Chia-ying (10 books). In 2000, Lauréat Publications published Collection of Yeh Chia-ying’s Works (24 books). In 2007, Zhonghua Book Company had published 7 series of Ye Jialing’s Lectures on Poems. Moreover, Peking University Press had published 7 series of Ye Jialing’s Lectures on Poetry. Her masterpieces has made great contributions to Community of Classical Chinese Literature and has built a loyal fan base. Book of Lingxi Poetry, one of her accomplished works won the first Outstanding Achievement Award of Social Science Research in Humanities for National Higher Institutions by Ministry of Education of PRC in 1995 (1st prize).

In December, 2008, she also won the first Lifetime Achievement Award for Chinese Poetry in Beijing. The speech at the presentation said that Professor Yeh Chia-ying has a worldwide reputation for her study on Chinese classical literature, and she also is a distinguished representative for the promotion of Chinese poetry across the world. She is an excellent scholar who worked on comparative research by introducing Western Literary Theory into the Chinese classical literature. With her novel and creative poetry, she has been a strong supporter of the academic community.

In 2013, she was the winner of China’s Wisdom – the Outstanding Contributor to the Promotion of the Chinese Culture organized by Ministry of Culture of PRC, the State Council Information Office of PRC, Overseas Chinese Affairs Office of the State Council, China Central Television (CCTV), the Chinese People’s Association for Friendship with Foreign Countries and Confucius Institute Headquarters (Hanban) together.

The new masterpiece of Professor Yeh Chia-ying - Seven Lectures on Poetic Remarks in the Human World Jen-chien Ta'u-hua was recognized as the China’s Fine Books of the Year 2014 organized by Publicity Department of the CPC, the Academy of China Book Review and CCTV.