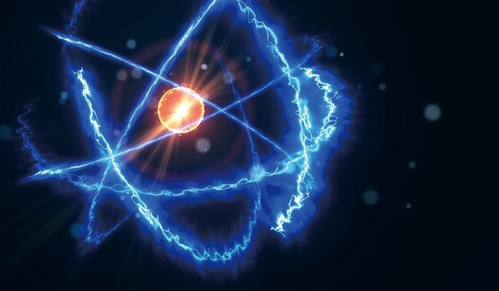 From experimentally detecting multi-quark states, to finely controlling optical metasurfaces, Nankai University’s School of Physics is carrying on the strong traditions started by its creator, and one of the founders of modern physics in China, Rao Yutai.

A quark is an elementary particle and a fundamental building block of matter. Quarks exist in six flavours — up, down, charm, strange, top and bottom. In nature, two or more quarks bound together through the strong force, via gluons, to form complex composite particles known as hadrons.

Well-known examples of hadrons include the proton (2 up and 1 down quarks) and the neutron (1 up and 2 down quarks). While it has been predicted, theoretically, that this strong interaction can bind more than three quarks, scientists had not been able to empirically verify the existence of such bound states.

This changed in 2013, when BESIIl collaboration discovered the charged charmonium-like state Zc(3900)± , a 4-quark state called a tetraquark. A group from Nankai University led by Yu Chunxu worked together with a group from the Institute of High Energy Physics of the Chinese Academy of Sciences, employed the Beijing Spectrometer III to detect the partner state of the Zc(3900)± and discovered a new charged charmonium-like state Zc(4020)± a few months later and its neutral partner Zc(4020)0 in 2014. This milestone finding reinforced theoretical predictions in quantum chromodynamics. Other particle physics experiments by Yu’s group have contributed to the study of charmonium decays, as well as the detection of gluons and the search for dark matter.

Nankai physicists have also made breakthroughs in quantum information theory by proposing a more general framework for Hardy’s paradox, an experiment devised in 1992 to support John Stewart Bell’s landmark 1964 nonlocality theorem, which disputes Einstein, Podolsky and Rosen’s local hidden variables theory of quantum mechanics. The paradox suggests circumstances in which a particle can interact with its antiparticle, yet not be annihilated.

In a recent Physical Review Letters paper, Nankai physicist, Chen Jingling, along with colleagues, presented ‘the most general framework’ for n-particle Hardy’s paradoxes. They demonstrate that for n greater than or equal to 3, the success probability is higher and thus stronger than the standard Hardy’s paradox. They also proposed an experimental approach to observe the paradox at work in a three qubit system.

This finding paved the way for revealing the connection between two seemingly different kinds of quantum phase transitions, which have local order and global topological order properties, respectively.

Shining a light on optics

They prepared metastructures on the surface of metal films and tuned the momentum matching process. A giant nonlinear effect, more than ten million times stronger than in natural materials, was obtained. They developed a new optical imaging display technology which achieved more than 20° nonlinear changes in the transmitted polarization by tuning spectral resonance of the structures. Related research will provide a new material platform for the development of nonlinear optical devices, and promote the transformation of optical communication coding and optical display to the all-optical mode.

They also discovered some nonlinear dynamics by shaping an optical pulse. For example, Hu Yi and Chen Zhigang participated in the international work on the first observation of Riemann (simple) waves which is of vital importance for understanding the dynamics of shock-bearing systems. The work published in Physical Review Letters, demonstrated that proper shaping of a laser pulse phase is a viable route to efficiently control shock formation.

Two-dimensional materials, such as graphene, are intensively studied thanks to their intriguing optical and electronic properties. At Nankai, Liu Zhibo’s research group focuses their efforts on controlling the angle between layers of two-dimensional materials and exploring the photoelectric properties of the corresponding structures. They developed a method that enables the selective transfer and fixed-point transfer of mechanically exfoliated graphene, specifically, they are able to transfer a finely processed target graphene to any position and leave the surrounding chaotic graphite fragments on the original substrate. Based on this approach, a multi-layer graphene preparation technology has been developed, capable of precisely controlling the rotation angle.

They were able to experimentally prepare double-angle three-layer graphene with a specific rotation angle, proving that the material can be regarded as a superposition of two double-layer graphenes with a corresponding rotation angle. The control angle between layers can be better than 0.1o. Through the corner regulation and layer number control, the photoelectric response performance was significantly improved, and the highest resolution of the current refractive index measurement was 1.7×10-8 RIU (refractive index units), which realizes ultra-sensitive single-cell real-time flow sensing and improves the accuracy of cancer cell identification, promising for early diagnosis.

Song Daohong, Chen Zhigang, and coworkers prepared a graphene-like optical microstructure called ‘photonic graphene’, using a nonlinear optical induction method. For the first time, in a graphene-like structure, they observed the pseudospin-mediated vortex generation, and proved that the pseudospin is a real angular momentum. Additionally, through an international collaboration, they found a new edge state that had never been predicated in graphene on the bearded edge of photonic graphene. These results were published in Nature Communications and Nature Materials.

Light control for use in integrated optics

A metasurface is a subwavelength-thick interface, in which light can be tuned by adjusting the way atoms are arranged. However, they are often plagued by anomalous refractive efficiency and narrow bandwidth problems.

The team discovered an inter-layer coupling mechanism and symmetry effect in the single to few-layer metastructure system. They revealed its interaction mechanism with the light and acoustic fields, and achieved efficient and powerful regulation. With this design, they achieved arbitrary and joint control of the amplitude, phase, frequency, and polarization state of the light field. In other research they focused on the generation of new vector light fields, optical multiplexing technology, and multi-functional integrated optics.

Their studies showed multiple interaction mechanisms between light waves, acoustic waves and metastructures such as an inter-layer wave interference effect, near-field coupling effect, and symmetry effect. This has led to new high-efficiency and arbitrary regulation technology for light and sound field at the sub-wavelength scale. Their work significantly expands the application of metastructures in light and sound field  regulation.

From China’s first silicon and lithium tantalite single crystals to the highly magnesium doped lithium niobate crystals, Nankai physicists have made many breakthroughs in crystal research in the past half century.

Lithium niobate crystals, prized for their unique physical properties, particularly their excellent optoelectronic characteristics, are known as the “silicon of photonics”, and can be used in a range of optical applications, from waveguides to modulators. However, a major obstacle for their use in optics is optically-induced refractive index inhomogeneity, discovered by Nobel laureate in physics, Arthur Ashkin, in 1966. This means that light beams will deteriorate due to unwanted refractive index changes, a result of the photorefractive effect. The same effect can be used in holographic storage, laser physics, information processing and computation.

After determining the basic defect structure models and establishing an electron transport model, Nankai researchers designed and grew a series of doped lithium niobate crystals to control their anti-optical damage and photorefractive properties.

Another breakthrough in condensed matter physics at Nankai is the synthesis of boron sheets, a work of international collaboration. Borophene, a two-dimensional (2D) superconductive material even stronger and more flexible than graphene, is hailed as a new wonder material. Theoretical studies predicted its existence in the 1990s, but its complex structure made its fabrication extremely difficult.

Working with international colleagues, Nankai physicist, Zhou Xiangfeng, improved the design and predicted a unique 2D boron structure, characterized by a distorted Dirac cone, similar to graphene, which enables ultrahigh carrier mobility. Based on this, they successfully grew a single layer of boron atoms on silver surfaces in an ultrahigh-vacuum chamber. The obtained 2D boron sheet is fully metallic, with superb electrical conductivity, and is super flexible. It has the potential to overtake graphene as the strongest 2D material. The work was covered in key international journals, and was considered to open a new era for 2D materials.