Shining a Light on Applied Physics

With strong roots in optics and photonics, TEDA Institute of Applied Physics (TIAP) of Nankai University, founded in 2003 and located in the heart of the Tianjin Economic and Technology Development Area (TEDA), is known for combining basic and applied research, as well as interdisciplinary research that integrates condensed matter physics, information science and technology, materials science, and life sciences. It builds on Nankai’s traditional strengths to develop emerging disciplines and industrial applications. Research results are demonstrated in a wealth of academic publications, awarded patents, and prizes, with some findings being applied in major engineering projects.

An example of the institute’s groundbreaking research is the study of nonlinear photonics, leading to the development of micro/nanostructure fabrication techniques. Nonlinear optics emerged as a research field after the invention of laser technology in the 1960s. Today’s femtosecond laser direct writing technology has enabled three-dimensional configuration and highly accurate structure fabrication, beyond the optical diffraction limit.

Using this technology, Nankai professors, Zhang Xinzheng and Xu Jingjun, the latter the founding dean of TIAP, proposed a compartmentalized, out-of-plane alignment method of liquid crystal for the preparation and design of photonic devices. The method, which resulted in a European and a US patent, enables spatial orientation of the liquid crystal molecules in a photonic structure to change continuously and smoothly. Based on femtosecond (10-15 seconds) laser-induced graphene oxidation, they further proposed a super-diffraction processing method that can achieve nanoscale precision when processing graphene micro/nanostructures, and realize the excitation and detection of graphene plasmons.

The propagation of plasmons may be improved by introducing defects into the graphene structure, as they can change its electrical and optical properties. Xu and his colleague, Cai Wei, proposed a new method for ion beam-induced artificially controlled graphene defects to control graphene plasmons. By using gallium ion beams to bombard graphene and form defects, and changing ion beam strength, the degree of amorphization of graphene defects can be artificially controlled, thereby directing plasmon reflection, and providing a novel method for plasmon response control of graphene nanoresonator structures.

Working with Wu Qiang, another Nankai professor, Xu led a team that studies the interaction between femtosecond laser and crystals.

The phonon polariton excited by femtosecond laser in the ferroelectric crystals was used to generate a terahertz wave on a lithium niobate chip. Multifunctional integration of generation, regulation, detection, and interaction with matter and subwavelength-structures helped find useful applications for terahertz waves. Image detection, beyond prior limits, was achieved on a terahertz chip, with a time resolution one-tenth of the pulse width, and spatial resolution one out of dozens of the wavelength.

On the basis of phonon regulation, femtosecond laser was also used to modify crystals such as silicon and lithium niobate by hyperdoping and micro/nanostructure processing, realizing photoelectric detection and modulation.

High-performance devices for real applications were developed, including a hyperdoped silicon photodetector with broadband spectral response and high gain at low bias, achieved using femtosecond laser processing. By coupling the waveguide of lithium niobate and metasurface (subwavelength-thick light-tuning interface), they developed an effective and highly sensitive method for trace substance detection using the simple surface wave mode, rather than the waveguide mode.

Their results demonstrated that the red blood cell cytoskeleton system is in a dynamic binding and dissociation state with strong deformability, which provides a new experimental basis for revealing the intrinsic mechanisms of erythrocyte cytoskeletal organization and extreme deformation.

Seeking to broaden the electro-optical applications of lithium niobate crystals, Nankai researchers, Sun Jun and Zhang Ling, found that stress is the most important factor affecting their temperature characteristics. Lithium niobate of different crystalline qualities reacts very differently when subjected to the same external clamping stress, leading to great variation in the effects of electro-optic applications.

Using a self-developed database-based computer crystal growth control system, Sun and Zhang grew a high-quality 7.6cm lithium niobate single crystal with a high crystal optical uniformity along the C-axis, or the direction along the stacking of crystal layers. Based on the crystal, they developed a Q-switching technique to generate energetic short pulses from a laser that can work stably in a wide temperature range of -55 to 70 degrees Celsius.

Adhering to the principle of openness and global inclusiveness, the institute has collaborated with renowned universities and research centres around the world, including, for instance, Stanford University and Purdue University in the United States, University of Vienna, in Austria, the Institute of Crystallography at the Russian Academy of Sciences, as well as global corporate giants, such as GE, NEC and DuPont.

As part of the internationalization strategy, Romano Rupp from the University of Vienna was selected as the dean of TIAP. His appointment has created positive and inclusive environmental and experimental conditions for research, collaboration and study. 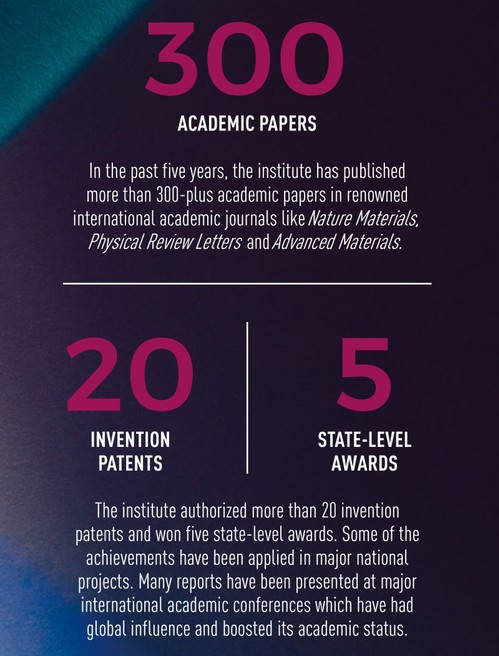