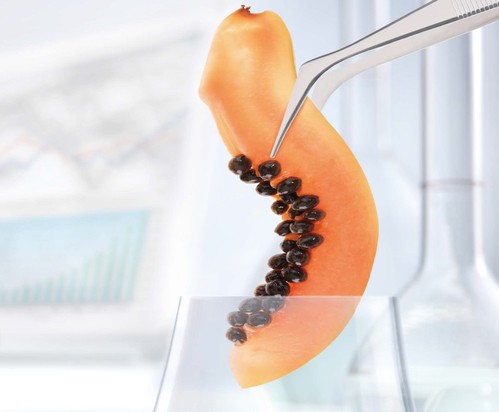 The papaya was the first genetically modified organism to have its genome mapped.

A partnership between Nankai University and the Tianjin Economic and Technology Development Area (TEDA) led to the launch of TEDA College in 2000. Now housing two institutes covering biotechnology and applied physics, TEDA College explores new models for research and education innovation, leveraging Nankai’s strengths and the expertise of its industrial partners in commercializing research.

TEDA Institute of Biological Sciences and Biotechnology (TIBSB), founded in 2003, has developed a range of tools and methods to improve clinical and industrial applications. Research by TIBSB scientists on functional genomics, microbe-host-environmental crosstalk, molecular virology and pathology, and rapid diagnosis of pathogenic bacteria has led to significant results. “We have built up an advanced international team to develop the next generation of biotechnology,” says Wang Lei, its director.

In the project, TIBSB researchers, along with international collaborators, found that transgenes remain stable in transgenic papaya. Comparisons of the modified papaya with natural ones highlight an evolutionary machinery in biosynthesis, starch deposition, as well as formation of the volatizing compounds, which give papaya its flavour.

From the macro-alteration of the genome to micro-regulation of individual DNA fragments, this study builds the foundation for understanding genetically modified crops and their medicinal, nutritional and biosafety properties.

The work was considered a major revelation in the mechanisms of transgenic modification.

In pathology, TIBSB researchers are investigating how cholera bacteria evolved to cause diseases. Wang’s team found that today’s cholera strain became a pathogen 100 years ago. By analysing historical DNA samples, Wang used comparative genomic approaches to draw an evolutionary roadmap, revealing the travel route of cholera through South Asia, the Middle East, and Indonesia. The route was found to be attributable to human movement, such as pilgrimages. The environment along the way, including the presence of other bacteria, gave evolutionary dynamics and crucial genetic materials to form modern pandemic strains.

“It tells a coherent story that is very biologically plausible,” says Edward Ryan, a Harvard microbiologist, in an interview with Science. This study reveals the origin and evolution of a cholera pandemic strain that poses a serious threat to humans and outlines its migration map on a global scale.

Working on environment-microbial crosstalk, TIBSB researchers have discovered critical microbial features evolved through their living environment. Gene comparisons of a new bacteria strain, NG80-2, evolved in an oil tank, along with an original strain, showed that NG80-2 were equipped by their environment for better adaptation. This new type of bacteria is effective at utilizing different kinds of energy sources and carries various transporters for efficient nutrient uptake and metabolism. NG80-2 also gains the ability to selectively degrade long-chain alkanes, a process to produce industrial energy, by which it reduces viscosity of crude oils and facilitates oil recovery in reservoirs. The NG80-2 work provides a model for the transformation of microbiological research to useful industrial production.

They also found another bacterial strain, evolved under extremely acidic conditions, that can degrade methane, a major greenhouse gas, which is of great potential for mitigating the greenhouse effect.

TIBSB is also pioneering studies of pathogenic and evolutionary mechanisms of intestinal microbes. Wang leads a team that elucidates pathways of how enterohemorrhagic Escherichia coli (EHEC), a strain of E. coli recognizes infection sites and leads to disease in humans. In general, high level of biotin, known as vitamin H, protects intestines from infection. Wang’s findings suggest EHEC can sense biotin status, and specifically colonize the human large intestine and induce infection. In addition, they found that E. coli are adept at genetic alteration for disguise, forming new types of protein to evade the detection and attacks by human immune system. They also discovered that E. coli can acquire a survival machinery to protect themselves in a low nutritional environment in the intestine.

These breakthroughs in microbiological research are improving the next generation of pathogen detection technologies. TIBSB scientists also proposed a new theory on molecular serotyping, creating a link between genes responsible for the synthesis of bacterial surface polysaccharide and bacterial serotype. It allows the establishment of the world’s largest serotype-specific molecular marker database for molecular serotyping and pathogen detection. This new technology can cover at least 85% known pathogenic bacteria, which makes it powerful in daily monitoring of the National Center for Disease Control and China Entry-Exit Inspection and Quarantine. The technology was also showcased at major events, such as the Shanghai World Expo, the Asia-Info Summit and the first China International Import Expo.

Since it began, TIBSB has been investigating major global problems, including public health, pathogen diagnosis, and bio-industrial production. Their contributions to the community are widely recognized, and have led numerous invention patents and awards. Their work is published in high-profile journals, such as Nature, Nature Communications, PNAS, and Genome Biology.