A Clean Sweep for Air, Earth and Water

Nankai University's College of Environmental Science and Engineering (CESE) is among the earliest providers of environmental science education in China. It is focused on understanding environmental processes and the underlying mechanisms, and developing novel technologies for pollution control. The college's research ranges from environmental geochemistry and toxicology to designing technology for real-time air pollution monitoring. CESE researchers are responding to urgent environmental protection through innovation in wastewater treatment, soil remediation, and resource recycling. 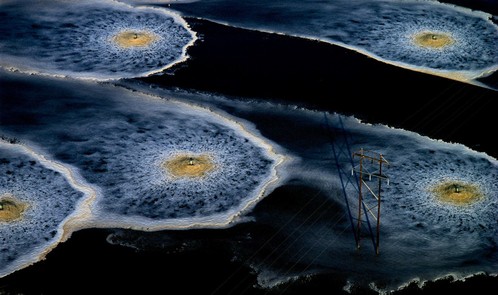 Water treatment for an eco-friendly future

A CESE team led by Qixing Zhou has developed highly effective eco-safe flocculants — substances that promote particle aggregation — and other water treatment agents, which minimize the detrimental residual effects of traditional agents, such as aluminium salts or iron salts. They also invented an ion exchange membrane and resin-coupled electro-deionization membrane system to purify water and recycle by-products without acid or alkali waste discharges. Another method enabled effective remediation of heavy metal-polluted water. Given these innovations, the team won first prize at the Tianjin Technological Invention Awards in 2015, and have led to 27 patents, and more than 100 publications.

Amongst other developments they have developed sensitive biomarkers based on Nereis, a type of polychaete worms, to reveal pollution risks in a water-sediment system; synthesized 3D superlattice titanium dioxide microspheres, which can efficiently remove pollutants from wastewater and prevent secondary pollution; constructed a supercritical water oxidation unit; and developed high-purity nano-iron materials for degrading noxious organic pollutants and removing inorganic pollutants.

Another CESE team, led by Wei Chen, focuses on assessing the processes of pollutants at the interface of multimedia systems (e.g. soil, water, air and biota) for enhancing remediation. They discovered the mechanisms and factors affecting the fate and transport of a variety of pollutants, including heavy metals, persistent and emerging organic pollutants, and aged nanomaterials in soil and groundwater systems. They also developed novel materials for efficient sequestration and degradation of these pollutants.

“With our new microbial agents and deodorization technology, degradable biomass wastes could be rapidly converted into organic fertilizer within 5 to 10 days,” says Meiting Ju, director of the Nankai University Engineering Center of Biomass Solid Waste Resource Utilization, which was granted Tianjin Engineering Center of Biomass Solid Waste Resources by Tianjin Municipal Science and Technology Bureau in 2012, and the National-Local Joint Engineering Research Center of Biomass Resource Utilization by the National Development and Reform Commission in 2019. Their technology for odourless degradation can reduce kitchen waste by more than 80% in six hours, and mixed organic household garbage by 95% in 24 hours at a temperature of less than 200℃.

Other inventions by Ju’s team include a new yeast agent that improves the protein content and palatability of corn cobs for cattle; a bio-fermentation technique that converts straw to animal feed; modified biochar that can be used for soil improvement and remediation; ionic liquids that can be used to extract cellulose from biomass for producing raw materials for chemical engineering; biomass-based clean fuels and anti-coking and anti-slagging additives; and a solar-powered bioreactor for kitchen waste degradation. These new technologies and devices significantly contribute to environmental protection, energy conservation, emissions reduction, and the development of a circular economy. The core technology developed by Ju’s team has been used in 14 enterprises across the country, and generated a revenue of more than 300 million RMB between 2016 and 2018.

While innovation in the chemical and medical industries has improved lives, it has also produced new pollutants. Studies by Nankai environmental scientists have improved our understanding of the origin and environmental distribution of these emerging pollutants and the risks they pose to the ecosystem and human health.

A team led by Hongwen Sun, the dean of CESE, focuses on pollutants such as perfluorinated alkyl substances (PFASs) and brominated flame retardants (BFRs), which are widely used in consumer products, ranging from plastics and electronics to textiles.

The team revealed that PFASs and other related pollutants originate mainly from wastewater treatment plants, rainwater and industrial discharge. Some ionized forms of the compounds can also be transported via the atmospheric particulates. The team’s studies on human exposure to PFASs and related chemicals suggest that these compounds and associated impacts can transfer to fetuses, with an inverted bell curve relationship between the length of the carbon chain in the molecule and the ease of transfer. The findings suggest short-chain substitutes are of high risks, and provide information to help limit exposure to these chemicals.

CESE’s Yi Luo found antibiotics and antibiotic resistance genes in water and sediment samples from China’s Haihe River. A significant threat to human health, these ‘superbugs’ may have originated from medical waste and biological treatment of sewage might cause their proliferation. Finding solutions to counter these new pollutants is on Lingyan Zhu’s agenda. Her team proposed a new sterilization mechanism, which could use artificial light to stimulate self-destruction of microbes. They have also developed catalysts that can mineralize emerging contaminants, minimizing their potential hazard. All these works won first prizes at the Ministry of Education Outstanding Scientific Research Output Awards in 2017.

Tracking the sources of air pollution

Researchers from the State Environment Protection Key Laboratory of Urban Particulate Air Pollution Prevention at CESE have investigated the sources of PM10 (airborne particulates with diameters less than 10 micrometres) and PM2.5 (particulates with diameters less than 2.5 micrometres) in more than 40 cities in China, including Shijiazhuang, a provincial capital where coal-powered industries have created significant pollution.

The group has established a novel predictive model by integrating models to improve identification of pollution sources. The analysis has enabled detailed categorization of the origin of the atmospheric particles, enabling effective control of pollution. Using this model, researchers precisely identified the precursors of secondary particles according to the sulfate and nitrate content in PM10 and PM2.5 pollution, as well as the contribution of different sources to gaseous oxides of sulfur and nitrogen in the air. They also established a regional pollution assessment protocol to analyze the spatial distribution and change over time of air-borne pollutants in Shijiazhuang and other cities.

Nankai’s CESE is a leader in studies on multimedia environmental behaviours of emerging pollutants; molecular mechanisms underlying ecotoxicological effects of environmental pollutants; characteristics of and remediation solutions for contaminated soils, sediments and water; biomass recycling; as well as the assessment and control of air pollution.

These studies have placed Nankai at the forefront of environmental sciences and engineering. Building on the university’s multidisciplinary research platforms, CESE researchers collaborate with research teams in other fields, including economics, management, law and philosophy, to conduct strategic studies on environmental management, the circular economy and ecological civilization. Committed to contributing to environmental protection in China and around the world, and helping to find ways to meet the UN Sustainable Development Goals, CESE is striving to be a world-class centre of research innovation and talent training. 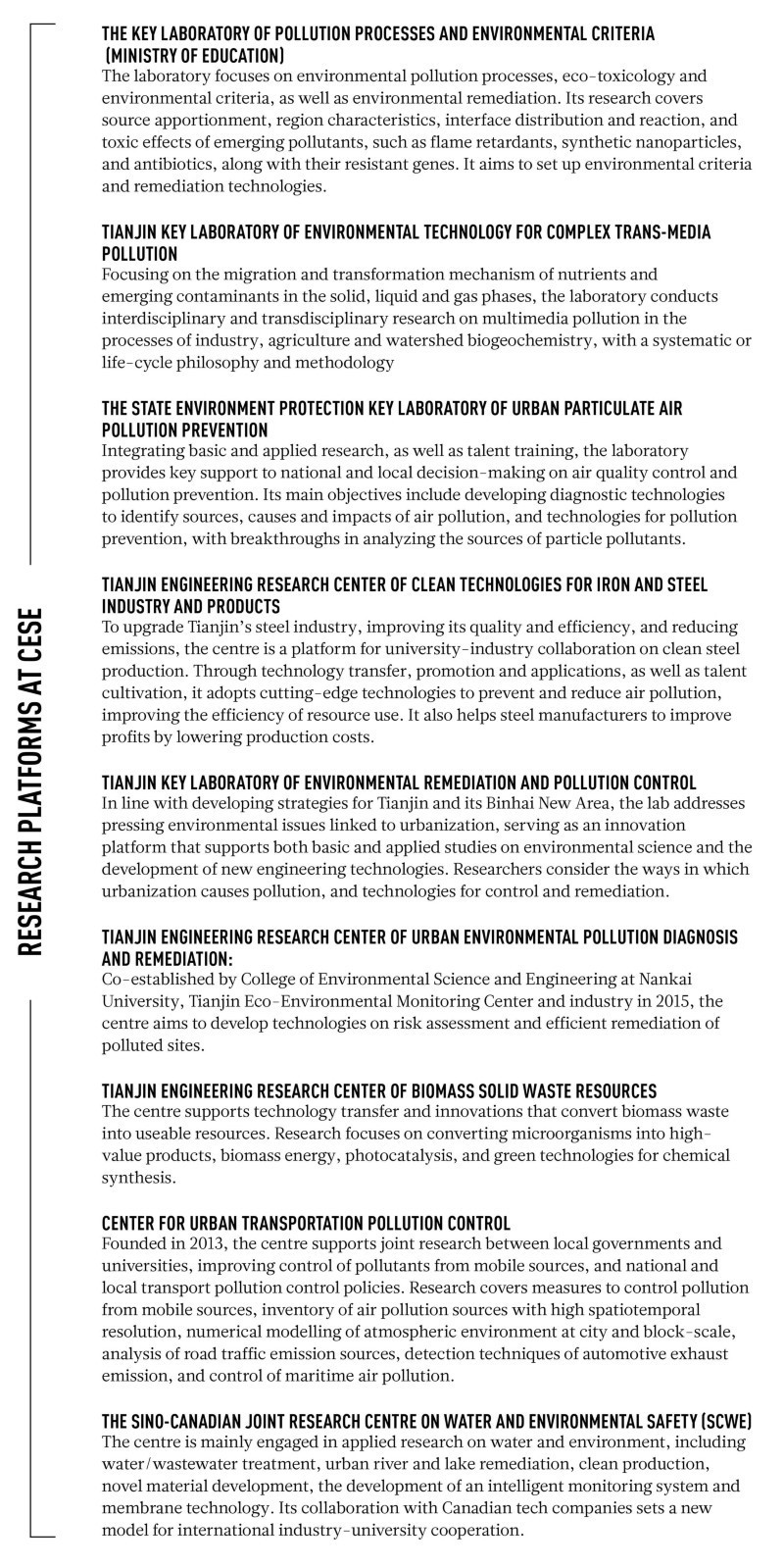