​"How brilliant the academic frontiers are."

From the Bohai Sea rim to the cultural sacred place

On July 29, 2018, as the plane took off steadily, we embarked on a summer camp study tour to Harvard Medical School. This study tour mainly focused on neuroscience and bioimaging.

The grand view outside the aircraft window was like ink and wash, which deeply attracted me. Sometimes the lingering light of the setting sun embroidered a golden line at the junction of the ocean and the sky, and sometimes the sun sank into the darkness, and a star of light on the tip of the wing silently lighten the day .Thirteen hours passed quickly. When I looked down at the prosperous city from the window, we finally arrived in Boston. The bus drove across the beautiful Charles River and finally arrived at the accommodation. 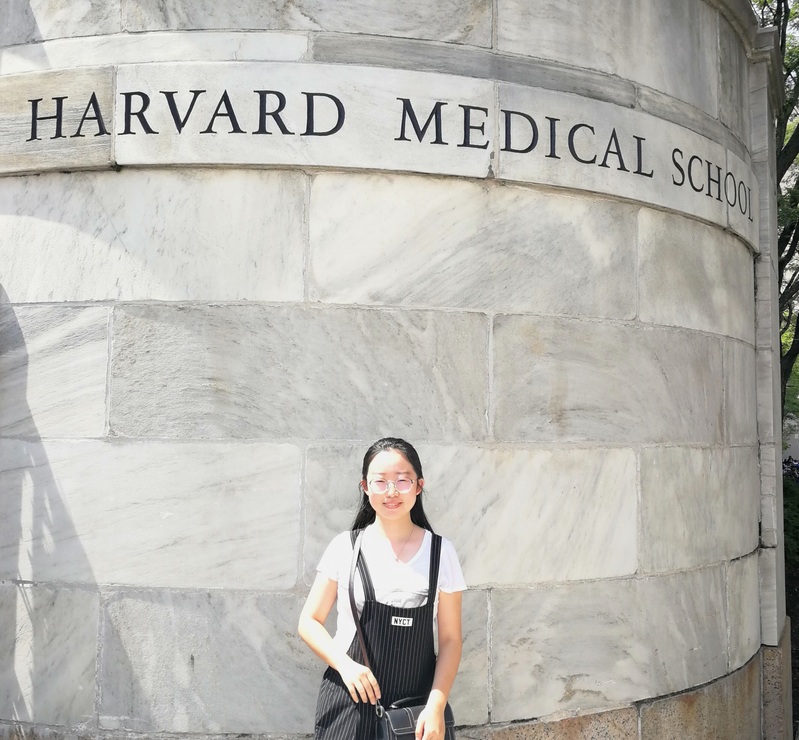 How brilliant the academic frontiers are.

After rest, the next day, as Boston gradually awakened in the morning light, we officially started the study tour. In the first week, the main content was neurobiology and medical imaging lectures mostly at the Athinoula A. Martinos Center for Biomedical Imaging. The buildings of the Martinos Center are simple but exquisite. And we would complete most of the study here in the first week.At nine o'clock in the morning, the morning sunlight in Boston flew through the opened curtains and the Harvard study tour also started. At the orientation, Professor Kong Xuejun of Harvard Medical School expressed his welcome to us. Professor Kong, President of the American Chinese Medical Exchange Society, is a great doctor, a tutor and a physician. Her scientific research field is autism. And she is admirable in medical and academic fields. Then, Bruce Rosen, director of Martinos Center, gave a speech to us. Director Bruce is an academician of the United States National Academy of Sciences as well as the American Academy of Arts and Sciences and also one of the founders of FMRI.As an important non-invasive and non-radioactive means of imaging diagnosis, MRI now tends to become perfect. He emphasized the importance of intersection and integration of disciplines to scientific research and learning. Martinos Center sets up laboratories for various disciplines, including medicine, physics, chemistry, computer science, etc., and the laboratories coordinate and cooperate perfectly with each other at work. Interdisciplinary study can make and brings convenience to innovation.

The curriculum schedule was very full and busy. In the first week, we were mainly arranged to attend lectures on the neuroscience frontiers at the Martinos Center. In the lecture in the afternoon of the first day, Professor Kong gave us a systematic introduction to American medical system and the training model of American medical students, and introduced the scientific frontiers of autism research. In just one day, everyone learnt about the firsthand characteristics of the American medical education model. On that day, maybe we cannot fully devote ourselves to the study in Harvard in Harvard’s way, but we already learnt that the class there was active, free to speak out and full of critical thinking and encouraged students to raise questions and to seek the truth. It is not difficult for us reflecting on traditional Chinese education to find out the differences between the Chinese and American education. However, the Chinese and American education should not be labeled as right or wrong. Instead, we should understand and perceive them with an open mind as well as a positive attitude in a long term and select the essence and discard the dross. The first day in Harvard, rich, enjoyable, original and rewarding, is bound to be unforgettable in my life!

In the following days within the first week, we listened respectfully to 22 professors’ wonderful lectures from Harvard Medical School and learned about the concise principles and latest development of MRI, PET, ultrasound, brain science and autism.

At the break between the two study weeks, I spent the weekend in learning about the humanistic connotation of Boston. My classmates and I made an appointment to take the Freedom Trail, the traditional visiting route of Boston and to enjoy the scenery along the way in Boston.

We were attracted by the Boston Public Library. The Boston Public Library, opened to the public in 1854, was the first large-scale free municipal library invested by the public in the United States. In the 19th century when knowledge had not been popularized, Boston took the lead in the cultural construction among the citizens, which shows the profound cultural deposits of this city.

Boston Common, the starting point of the Freedom Trail, is located at the center of Boston and covers an area of 59 acres, and the adjacent public gardens are the most central places in Boston. Strolling in the park, the trees covered the sky, the flowers and plants were luxuriant, and the visitors came and went in a continuous stream. In this park, people and animals got along naturally, squirrels basked freely under the tree in the sunshine and pigeons paced leisurely. All of these added some tranquility and comfort to the Sunday in Boston.

The Massachusetts State House is opposite the park. This building was designed by the famous architect Charles Bulfinch in the 18th century. And the unique golden dome of the building has long been a symbol of Boston. The Quincy Market with a long history is a famous American traditional market in Boston. There are many delicacy booths in the central building of the market. And the two adjacent buildings are currently filled with fashion, decorations, jewelry and gift shops. We also tasted the Boston Lobster which has become a symbol of Boston. Boston lobsters are big and delicious.

What scenery along the way impressed me most was the Charles River that traverses the city center. And the world-class universities such as Harvard University and MIT are lined up on both sides of the wide river. Standing on the bridge, the rushing vehicles behind and the sparkling water contrasted with each other. The hustle and bustle of the city was immediately submerged in the river and shrouded in the quiet blue aura of the Charles River. The beautiful Charles River makes this city charming and lovely.

Although we had studied for several days from the professors at Harvard University, we know very little about the Harvard University campus. In the second week, we mainly visited the Harvard University campus, Harvard Medical School as well as laboratories and some advanced artificial intelligence companies. On the first day of the second week, along with the morning light, we arrived at Harvard Medical School and passed by Boston Children's Hospital covered by green plants. The gray-black granite was printed with the concise name and emblem of the hospital. The Boston Children's Hospital has an ordinary appearance but is the best children's hospital in the world. The same is true for the gate of Harvard Medical School. The name of Harvard Medical School is engraved on a white marble, and a stone tablet is engraved in the wall of a building beside. The stone tablet records the name of the building and its origin: this building is the Sears laboratory named in memory of two Sears professors in the 19th century. We also visited the museum of Massachusetts General Hospital and Spaulding Rehabilitation Hospital, the best rehabilitation hospital in the United States.

The next day, we visited the Harvard University campus. We were lucky to learn about some interesting stories about Harvard University. For example, the real appearance of John Harvard is never known by the later generations because his portrait was destroyed by fire. Actually, the statue of John Harvard at Harvard University campus is not John Harvard himself but was designed according to the image of a student of Harvard University when the bronze statue was built. This story mainly tells Harvard students not to blindly trust the authority but to dare to doubt it.At the same time, we also learned about that the Widener Library, the largest library of Harvard University, was sponsored by Mrs. Widener whose son died in the Titanic shipwreck when he went back to the room with his father to find books in the room. She donated all her savings and her son’s collections of books to fund the construction of Harvard library. Harvard students say that if you want to find a book in the library, you need to prepare three things--a hamburger, a flashlight and a compass. Thus, that proves the large size of the library and the large number of books in the library.

Time flies. The two-week academic summer camp brings many benefits and insights to each of us. The 22 Harvard professors not only imparted knowledge to us, but also opened different windows for us, giving us the chance to stand on tiptoes and look to the far future and to learn about the most cutting-edge biomedicine research in the world.

Idle boast the strong pass is a wall of iron.

The experience in the two weeks is unforgettable in my life. I learned a lot of valuable knowledge and broadened my horizons; but at the same time, I also realized that those are just a small part of extensive and profound medicine science. The medical technology, architectural style and modern humanities there are full of praise. More than ten days ago, I embarked on a tour to the United States with excitement. After more than ten hours flying, the fantastic journey begun. The study tour in Harvard University enables us to experience the differences between Chinese and American higher education and to comprehend the style and connotation of world-class universities.

The two-week tour in the United State ended soon. With regrets, we embarked on the journey back to China. This study tour not only broadened our horizons, but also made us deeply understand the differences between different cultures. And we still need work hard to catch up. We should study harder and pay more attention on innovation, focus on the development of interest in study, dare to doubt the authority and to recommend ourselves, believe in ourselves and plan a better future.

With bright eyes, firm steps, reading ten thousand books and traveling ten thousand miles, I will realize my goal and make contributions to the Chinese and even all mankind’s medicine cause step by step. And I will be determined to become an outstanding doctor and connect with the world, continuously walking on the road full of flowers!