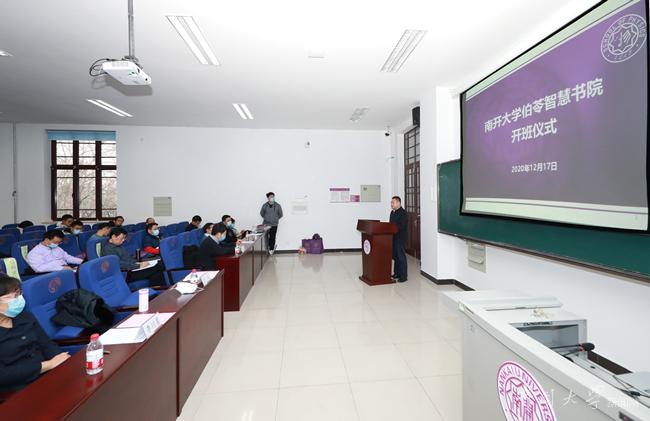 Boling smart College (hereinafter referred to as the College), which is subordinate to School of Physics, will be hosted in turn by School of Physics, School of Mathematical Sciences, College of Chemistry, College of Life Sciences and School of Economics, all of which have Boling Classes. The College plans to enroll 110 students every year, of which 30 are from the host college and 20 from each of the other colleges, with student/tutor ratio of 10:1. A training period closes when all students of same session graduate.

Adhering to foster virtue through education, and focusing on the innovation of institutional mechanism and reform of education and teaching, through strengthening mission driving and prioritizing experts’ leadership, innovative learning methods, comprehensive qualities, cross-disciplines, as well as science and education integration should be promoted, so as to build up the base for the top-notch students training in basic scientific disciplines.

Making use of modern information technology, and exploring College system in the new era, the College succeeds in pooling mathematics, physics, chemistry and biology study in one place, integrating immersive learning, nurturing, edification and education as a whole, as well merging knowledge exploring and personality cultivation into one. By exploring the operation mechanism of characteristic management, the College realizes organic combination of teaching affairs, experts governance and professional management team; achieves flexible and efficient teaching management; as well as forms a smooth connection with the relevant institutions inside and outside NKU, so as to promote the base construction for the top-notch students training in basic scientific disciplines and help those students grow up healthily into talents.

Underpinned by the information digital technology, the College has adopted a new College mode with networked organizations, substantive activities and intelligent learning. Through humanized content design and modern means of communication, the College has implemented the operation mode of online classes, online courses, offline tutoring and offline activities, which gives full play to the “contact function” of smart Platform and improves efficiency. The details are as follows:

College’s students can choose interdisciplinary courses with tutors from different schools. Through setting up general elective courses, organizing scientific and research practices, promoting entrepreneurship and innovation, carefully designing online courses and offline lectures, holding a variety of academic exchanges and service-learning practices, the College has inspired students with outcomes and reflections after study, so as to achieve the goal of self-remodeling through the integration of arts and sciences.

Professor Li Lei received Ph.D. in Plant Biochemistry from the University of Western Australia in 2009-2013; Li worked as Assistant Research Fellow at the ARC Centre of Excellence in Plant Energy Biology in Australia from November 2012 to September 2018. During this period, he went to VIB in Belgium for short-term cooperative research. He was hired as a Professor of College of Life Sciences of Nankai University in September 2018 and was selected in the 100 Young Academic Leaders Plan in Nankai University.

Professor Li Lei has been committed to plant biochemistry research and has carried out researches on protein stability, protein complexes assembly and protein degradation pathways. Li has published 14 academic papers with cumulative influence factors of over 80 and H-index of 11, with 7 articles as the first author, including Trends in Plant Science (1), Plant Cell (1), Molecular and Cellular Proteomics (1), Plant Journal (1) and JBC (2) . Li has been invited to give keynote speeches at the Australian Biochemistry and International Proteomics Conference and was awarded the Young Scientist Award by the Australia-China Conference on Science, Technology and Innovation in 2017. Li serves as the review editor for Frontiers in Plant Science, a well-known botany journal. Li also reviews for major academic journals such as Nature Plants, Plant Journal, Plant Physiology, New Phytologist, Journal of Proteome Research, etc.

Professors, Director of Department in School of Mathematical Sciences

Liu Yang is a researcher and doctoral supervisor. He received bachelor’s degree from College of Chemistry, Nankai University in 2006 and received Ph.D. in Polymer chemistry from Nankai University in 2011. Liu went to UCLA in the same year, and received his second ph.D. in Chemical Engineering and Molecular Bioengineering in 2016. After graduated in 2016, Liu returned to China and joined Nankai University’s College of Chemistry, setting up a research team to carry out researches. Currently, his researches focus on the study of polymer nanomedicine related to the treatment of major diseases such as cancer and chronic diseases.

Yang Jianyi is a professor and doctoral supervisor at Nankai University. Yang graduated from Nanyang Technological University in Singapore in 2011 and worked as a postdoctoral researcher at the University of Michigan, USA, from 2011 to 2014. Yang joined Nankai University in early 2015 and was promoted exceptionally to professor at the end of 2017. In 2016, Yang was elected to the 1000 Youth Talents Program and funded by the Fok Ying Tung Education Foundation in 2018. With research direction on bioinformatics, Yang has published 30 SCI papers as first author or correspondent in journals such as Nature Methods. The published papers were cited more than 3000 times by SCI, and 3 papers were selected as ESI highly cited papers.

Qiao Xiaonan, male, born in 1981 in Tianjin, Associate Professor at Nankai University’s School of Economics, master’s tutor, researcher of the Collaborative Innovation Center for China Economy. He graduated from Department of Economics, Nankai University with Ph.D. in Political Economy. He is also a visiting scholar to Faculty of Political Science and Economics, Waseda University, Japan. He is mainly engaged in research of political economy and environmental economics. He has published more than 60 academic papers in Chinese and foreign journals such as Economic Research Journal, Management World, Studies on Marxism, China Economic Quarterly, The Journal of World Economy and China Industrial Economics. Meanwhile, he serves as an anonymous reviewer of 14 domestic journals. He has presided over more than 10 projects such as the general projects of the National Social Science Fund, the general projects of the Tianjin Philosophical and Social Sciences Planning and its youth project. He is also an executive member of the National Marxist Economics Youth Forum, executive member of the Annual Meeting of Chinese Young Scholars of Political Economy, Director of Research Association for China’s Economic Development, Director of Tianjin Economic Society. He has advocated and organized of Nankai Young Scholar Forum of Marxist Political Economy. In recent years, he continues research in areas based on the basic principles of Marxist political economy and its mathematical methodology, the development of contemporary capitalism and the construction of a modern socialist economic system.

Wang graduated from Nankai University’s College of Chemistry as undergraduate in 2007, and achieved doctoral degree from the University of Maryland in 2012. Wang had conducted postdoctoral research at the Scripps Research Institute from 2012 to 2015, and joined Nankai University’s College of Chemistry and State Key Laboratory of Elemento-organic Chemistry in April 2015 as a Distinguished Researcher and Doctoral Supervisor. After joining Nankai University, Wang began research in organoboron catalytic chemistry, and has undertaken a number of scientific research projects at both national and provincial level. Wang has published more than 10 influential international journal papers, and has won the Asian Organic Chemistry Federation ACP Lectureship Award (2018) and the first Tencent Charity Foundation funded Xplore Prize (2019)

Research direction: Design, preparation and biomedical use of new probes of molecule imaging

Ding Dan, research fellow at State Key Laboratory of Bioactive Material Research (Ministry of Education) and State Key Laboratory of Medicinal Chemical Biology, School of Life Sciences, Nankai University. Ding graduated from School of Chemistry and Chemical Engineering (SCCE), Nanjing University in 2005 as undergraduate and achieved Ph.D. in Department of Polymer Science and Engineering, Nanjing University in 2010. In August 2010, Ding joined the Department of Chemical and Biomolecular Engineering at the National University of Singapore in the preparation and biological application of new fluorescent probes. Ding became a professor at Nankai University in March 2013. Ding’s research group is focused on the design, preparation and biomedical application of new type of molecule imaging probes. The research group mainly develops new molecular imaging probes based on “aggregation-induced emission luminogen (AIEgen)” and semiconductor conjugated polymer, and the group is committed to developing new materials and methods for diagnosis and treatment of serious diseases such as tumor and tissue ischemic. Since 2013, Ding has been selected into talent programs such as “the Thousand Talent Program for Young Outstanding Scientists” in Tianjin, “Hundred Young Academic Leaders Program” at Nankai University, “Young Scientific and Technological Talents in Tianjin”, and Outstanding Youth in Tianjin. In 2016, Ding has been supported by the National Natural Science Foundation’s Science Foundation of China for Excellent Young Scholars. To date, Ding has published more than 60 SCI papers as correspondent in major international journals such as Nature Communications, JACS, Advanced Materials, etc. Ding’s research achievements have attracted wide attention from domestic and foreign peer experts, with SCI papers cited more than 6,600 times and H-index, 48.

Professor, Director of Department of Modern Physics, School of Physics

Liu lectures the compulsory course of physics, Theoretical Mechanics (available in spring semester of sophomore year). Liu is awarded Tianjin Outstanding Teacher in Teaching, and inspector of Tianjin Municipal Education Supervision Committee. Liu’s main research direction is particle physics theory in theoretical physics, and the specific area is law of strong interactions and the properties of particles with strong interactions. He has published more than 50 research papers on Physical Review Letters, Physical Review (D), Nuclear Physics (B) and Journal of High Energy Physics.

Liu is currently a member of Teaching Steering Committee of Colleges and Universities of the Ministry of Education and member of the North China Regional Working Group. Liu is also director of Chinese Nuclear Physics Society and Computational Physics Society, vice Chairman of the Research Association of Physical Mechanics of Colleges in China, evaluation expert of National Natural Science Foundation of China, and evaluation expert of the Ministry of Education, reviewer of journals such as Chinese Physics Letters and Commun in Theor Phys. Liu has won the title of excellent teacher with morality in Tianjin and other honorary titles.