homepage  About NKU  Who We Are
Motto

Dedication to Public Interests, Acquisition of All-round Capability, Aspiration for Progress with Each Passing Day.

The school motto was not explicitly put forward at the beginning of the school establishment. The motto was gradually developed and perfected in long-term practice. In the beginning, the founding father Yan Xiu raised the proposal of valuing public interests, self-defense as well as student’s capabilities in response to the selfishness, non-resistance, and impulsiveness. On July 10th, 1908, Yan Xiu showed his earnest expectation for the pioneer batch of Nankai Middle School, and he told them “please always aspire to patriot rather than noble government officials”, which is the purpose of the founding of Nankai. Although the above school motto was formally put forward after Yan Xiu’s passing away, it was consistent with his educational theory.

According to the records, on October 17th, 1934, the president Zhang Boling officially announced at the celebration of the 30th anniversary of the establishment of Nankai School and Nankai adopted Dedication to Public Interests, Acquisition of All-round Capability) as its school motto, whose syntactic structure comes from the sentence “yun wen yun wu” (Dedication to civilization, acquisition of military forces) of Lu song, The Book of Songs. “Yun”, the first auxiliary word, means “again and still”, and “Yun gong yun neng” can be summarized in three words: responsibility, capability and creativity.

The words “Ri xin yue yi” are adapted from The Book of Rites and The Great Learning, which means “Aspiration for Progress with Each Passing Day”. On September 20th, 1916, Zhang Boling gave a speech in the self-cultivation class, and he pointed out that, "The enterprising spirit has existed since ancient times." There is a sentence “The movement of heaven is full of power, thus the superior man makes himself strong and untiring” in the Book of Change. Here, “Tian xing jian” emphasizes the movement of heaven and the great changes of the world. While reading, we can feel the power of enterprising, which is the source of “Ri Xin Yue Yi”. The school song which was written on the eve of the May 4th Movement, merged the idea of “Yue Yi Ri Xin”, which means “Aspiration for progress with each passing day”. And it encourages us to accept new things and try to produce something new. We should not only catch up with the new, but always aspire to make progress with each passing day. 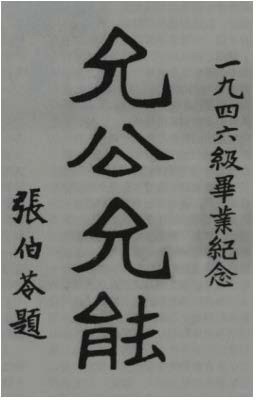 The school motto written by Zhang Boling for graduates in 1946 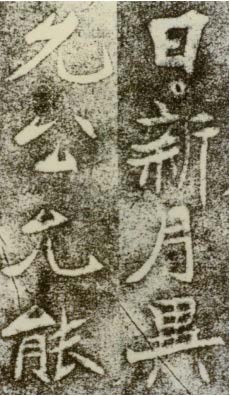 Zhang Boling gave a clear explanation of the school motto in his article “A Review of Nankai for the past 40 years” on October 17th, 1944, the 40th anniversary of Nankai School. Considering the social phenomena of “ignorance, weakness, poverty, cohesion- lacking and selfishness”, Zhang pointed out that, Nankai aims to cultivate “passionate love for the country and the community” and “capacity to serve for the society”. In response, we should always dedicate to public interests, love our community, and prepare to sacrifice for our country. Besides, we should acquire all-round ability to get rid of our ignorance and become strong. The school motto is the guidance of national prosperity and strength, and it can help make useful talents out of the nation. Based on the 40-year struggle, Zhang pointed out that Nankai has been working hard and striving for self-improvement in the past years, and thus, the spiritual power that our school motto brought represented a unique quality of teachers and students in Nankai. When Zhang Boling passed away in Tianjin on February 23rd, 1951, he wrote in his will, “What I strive for, including science education, health education and patriotic education, as well as our school motto, would be fulfilled under the guidance of government in the future.”

The eight Chinese characters “Dedication to Public Interests, Acquisition of All- round Capability” that are used in Nankai publications and some formal announcement, are derived from the handwriting on the tombstone of Zhang Boling and his wife, which is written by our alumni and the famous calligrapher Wu Yuru in 1962. In the past hundred years, adhering its school motto, Nankai has closely integrated its own development with the society. No matter how hard it is, we continue to work harder and harder, and as a result, a large number of outstanding talents have been cultivated for national rejuvenation and prosperity.