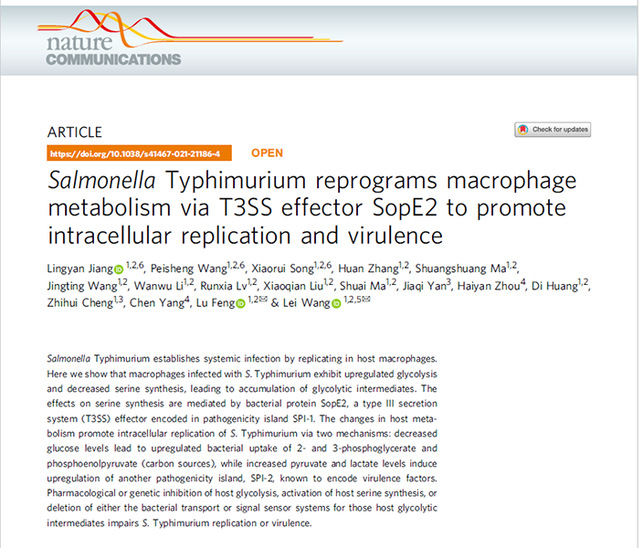 The research team led by Prof. Wang Lei and Prof. Feng Lu of Nankai University has made progress in the study of the interaction mechanism between pathogenic bacteria and its host cells. This paper—Salmonella Typhimurium reprograms macrophage metabolism via T3SS effector SopE2 to promote intracellular replication and virulence was delivered on Nature Communications on February 9, 2021.

Interactions with the host cells at the metabolic level are critical for the pathogenicity of pathogenic bacteria. Host cells can enhance resistance and clearance of pathogenic bacteria by modifying metabolic pathways when infected; while some pathogenic bacteria can manipulate host cell metabolism through different mechanisms to improve their own survival. Salmonella enterica serovar Typhimurium (STM) is an important intracellular pathogen that causes gastroenteritis and life-threatening systemic disease in humans, causing more than 110 million cases and approximately 350,000 deaths worldwide every year. The replication in macrophages is the key for STM to establish systemic disease in a susceptible host. However, the effects of STM infection on macrophage glucose metabolism remain unclear, being a hot topic but also a challenge in the pathogenesis research of pathogenic bacteria. 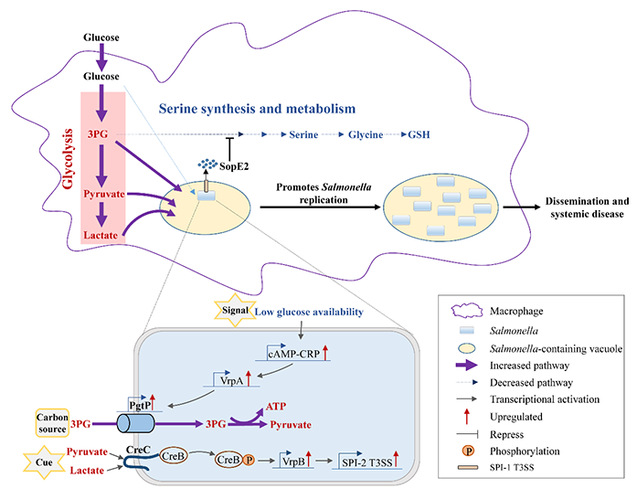 The research team used targeted metabolome, Seahorse analysis, transcriptome analysis and other advanced molecular biology techniques and found that STM can manipulate the metabolic reprogramming of macrophages via T3SS effector SopE2. It increases cellular glycolysis while suppressing serine synthesis, resulting in the accumulation of intracellular glycolytic intermediates. Further studies revealed that, on the one hand, the 3PG accumulation in macrophages during this process could be utilized by STM as carbon sources, thus promoting its intracellular replication; on the other hand, pyruvate and lactate accumulation in macrophages induces creBC expression in STM. Animal experiments showed that the transduction system and signal sensing system of glycolytic intermediates in STM mutans could significantly reduce the pathogenic ability of STM.