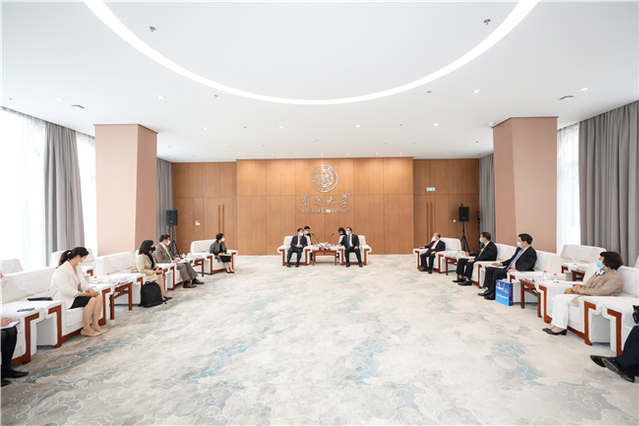 Cao Xuetao extended his welcome to the ambassador and the entourage, then introduced the exchanges between Nankai University and South Korea. He said that at the beginning of this year, the two heads of state jointly launched the “China-ROK Cultural Exchange Year”; next year China and South Korea will celebrate the 30th anniversary of the establishment of diplomatic relations. Over the years, Nankai University has conducted extensive cooperation with South Korea in higher education, technology, and culture. The teachers and students of Nankai will continue to contribute to the further development of China-ROK relations.

Jang Ha-sung said that Nankai University is a prestigious university with a time-honored history and a close connection with South Korea. The R.O.K. side is willing to actively build a bridge for cooperation between Nankai University and South Korea in various fields, promoting exchanges between the younger generations of the two nations.

After the meeting, Jang Ha-sung made a speech titled “The Prospect of South Korea-China Relations and the Role of the Youth” at “the Lecture Hall of Tianjin” of the Tianjin Foreign Affairs Office and at the “Zhou Enlai Forum” of Nankai University. Luan Jianzhang conveyed appreciation for the amazing speech delivered by the ambassador, and expressed his hope for further cooperation between Tianjin and South Korea. Wang Lei in his speech encouraged the students of Nankai to take an active part in international communication, and to continuously promote China-ROK relations.

(Reported by Fang Lan, photographed by Qiqi Zong, translated by Junlin He, edited by Davide Francolino and JianjingYun)