For years, phonon polariton has been getting wide attention in condensed matter physics, optics and material science. After over ten years of efforts by the team of Prof. Wu Qiang and Prof. Xu Jingjun of Nankai University, the fundamental system of theoretical, experimental and applied research into terahertz phonon polariton has been constructed.

Based on the Huang equations, they have developed the modified Huang equations that extend from linearity to nonlinearity, and realized the giant nonlinearity effect of the terahertz waves through phonon polariton. The results have been published in Nature Communications. The co-first authors are the doctoral students Lu Yao and Zhang Qi, and the corresponding authors are Prof. Wu Qiang, Prof. Chen Zhigang and Prof. Xu Jingjun.

Fig.1: “frozen-phase” propagation of terahertz pulses in LiNbO3 subwavelength waveguides after the elimination of first-order dispersion

In terms of basic theory, apart from the nonlinear Huang equations, the Nankai research team has also completed the equations, numerical simulation and experimental verification of electromagnetic wave propagation in anisotropy subwavelength slab waveguides (in partnership with MIT) and subwavelength rectangular waveguides. As it is shown in figure 1, after the temporal soliton formation by eliminating second-order dispersion, this is the first “soliton-like propagation” with a locked phase of optical pulses. Published in Laser & Photonics Reviews, the research has offered references for phase modulation in pure-phase terahertz communication, terahertz nonlinear mixing and high-energy short-pulse terahertz source. 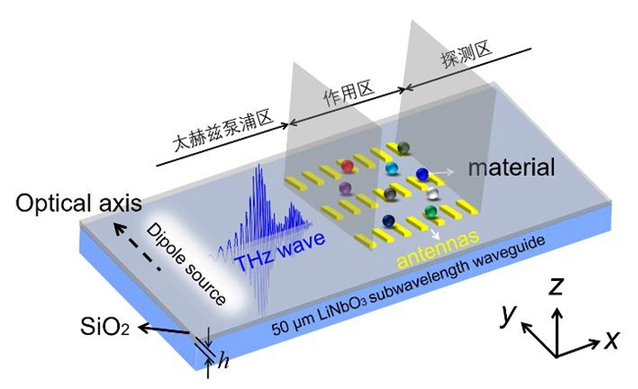 In terms of application, the team led by Prof. Wu Qiang and Prof. Xu Jingjun has developed multiple technologies. Utilizing the composite structure of metasurfaces/LiNbO3 subwavelength waveguides, the team has designed and produced the on-chip terahertz sensor for detecting traces of solid powder. Additionally, the design can also be applied to on-chip integrated terahertz time-domain spectroscopy, replacing the spectral collector of dozens of centimeters in a traditional TDS spectrometer with a lithium niobate wafer of a few millimeters, as it is exhibited in figure 2 (top articles in the Photonics and Optoelectronics section of Applied Physics Letters).

According to the gradient metasurfaces structure, the team has succeeded in asymmetric propagation of terahertz waves by asymmetric conversion of mode. It is also a prototype of on-chip integrated terahertz diode based on phase modulation, as it is shown in figure 3 (cover paper of ACS Potonics). 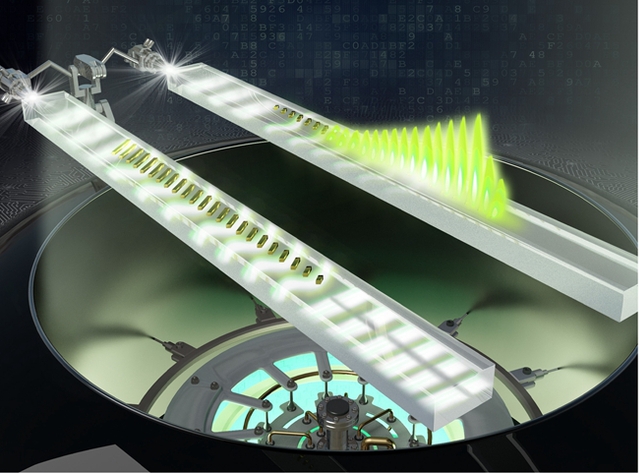 After more than ten years of efforts, the Nankai University research team has obtained an in-depth understanding and major research achievements, establishing an organized research system with regard to terahertz phonon polariton.

(Contributed by School of Physics, translated by Wei Luo, edited by Davide Francolino and JianjingYun)