According to Newton's second law, acceleration occurs when the combined external force on an object is not zero. However, there are phenomena in nature that acceleration can be achieved without external forces. For example, radial acceleration based on negative masses - where positive and negative masses interact with each other and continue to accelerate in the same direction; or self-acceleration based on wave packet interference, which is essentially a dispersion effect with an endogenous gravitational potential field, and a typical example of which is the Airy wave packet. In optics, these concepts are used to generate novel optical fields such as self-bending beams and self-accelerating pulses, which play a unique advantage in optical manipulation, super-resolution imaging, precision measurement, and micro- and nano- processing.

Though the two types of self-acceleration effects mentioned above have received widespread attention, there has not been connection between them. Recently, a research team led by Professor Hu Yi , Professor Chen Zhigang, and Professor Xu Jingjun at the School of Physics, Nankai University, in collaboration with professor Roberto Morandotti at the Institut National de la Recherche Scientifique, Canada, has unified the two types of self-acceleration effects that have been widely studied. They established the unification of the two types of self-acceleration effects with theoretically finding that Airy wave-like packets can be directly used for the construction of radial acceleration. The team further demonstrated this result experimentally using a nonlinear optical pulse transmission platform (see figure below) to realize self-accelerating pulses with tunable peak numbers, which can be applied in the precise control of optical pulses, frequency conversion, and information encoding. The research result has been published in Physical Review Letters under the title of Unveiling the link between Airy-like self-acceleration and diametric drive acceleration, with Nankai University as the first author's organization, Zhang Ping, a doctoral student at Nankai University, as the first author, and Professor Hu Yi and Professor Xu Jingjun of Nankai University as co-corresponding authors.

(Link to the paper: 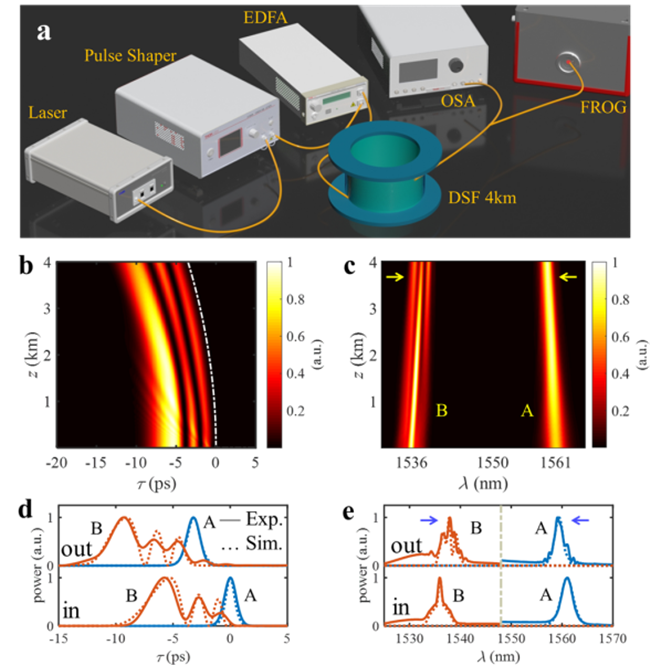 Reported by Xia Huanyun and edited by Lan Fang.