The team led by Professor Fu Xuewen from the Ultrafast Electron Microscopy Laboratory, School of Physical Sciences, Nankai University, the team led by Professor Yi mei Zhu from Brookhaven National Laboratory, and along with other collaborators, have observed the distribution and dynamic process of the femt osecond laser induced surface plasmons on silver film based on the self-developed 4D ultra-fast transmission electron microscope, thus providing guidance for the design and application of plasmon components. Recently, this study was published under the title of "Nanoscale-Femtosecond Imaging of Evanescent Surface Plasmons on Silver Film by Photon-Induced Near-Field Electron Microscopy" on the Nano Letters, an important international academic journal.

In recent years, the team of Professor Fu Xuewen developed the photon-induced near-field electron microscopy (PINEM) technology with partners in 4D ultrafast transmission electron microscope based on free electron-photon strong interaction. It proposed a novel two-color photon ultrafast pumping-detection scheme to improve the time resolution of 4D ultrafast electron microscopy by an order of magnitude (hit 50 femtosecond) and disclosed the dynamic process of insulator-metal phase transition of the single Mott insulator VO2 nanowire at femtosecond and nanoscale (Nat. Commun. 2020, 11, 5770). In this work, the team further studied the distribution and ultrafast dynamic process of surface plasmons on silver film with PINEM imaging technology.

The team studied surface plasmons induced by a femtosecond laser (wavelength: 515 nm) on a silver film using a 4D ultrafast transmission electron microscope equipped with an electron energy loss spectrometer through the PINEM technology. The energy spectrum of the near-field interaction between the electrons and surface plasmons obtained from the experiment showed typical PINEM energy spectrum characteristics: an arrange of discrete peaks appeared on both sides of the zero loss peak (ZLP) of electron energy spectrum with an interval of an integer multiple of incident photon energy. It means electrons have absorbed or emitted multiple photons in the near-field interaction with surface plasmons (Fig. 1a). Through changing the energy density of the pump laser and integrating the PINEM in the electron energy spectrum, they found that the intensity of PINEM first increased linearly along with the laser energy density and then reached saturation point at 15mJ/cm2 (Fig. 1a, b). At the 15mJ/cm2 energy density of incident laser. Through changing the polarization of laser, they studied the polarization dependence of the PINEM intensity. They also found that the polarization dependence of the PINEM intensity was different from that of nanowires and nanorods and the change of direction of laser polarization would not affect the PINEM intensity on silver film (Fig. 1c). 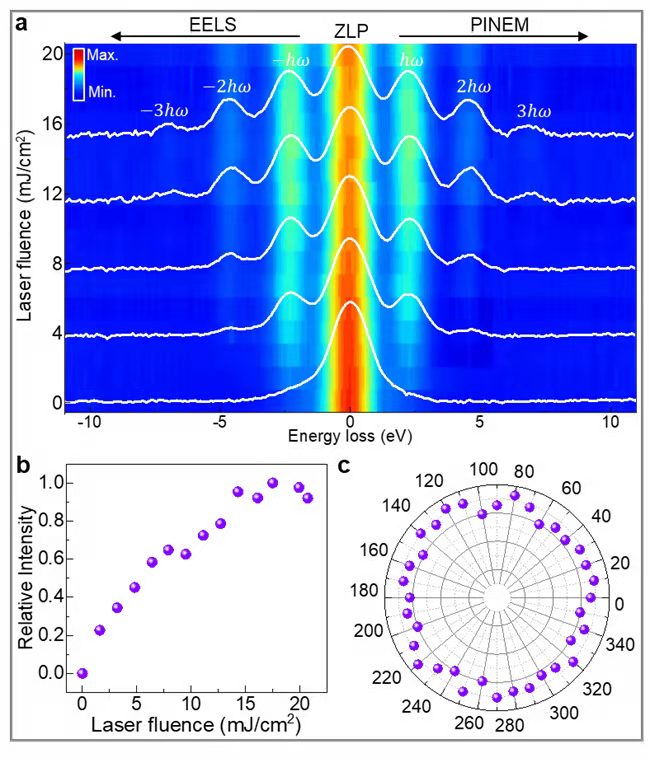 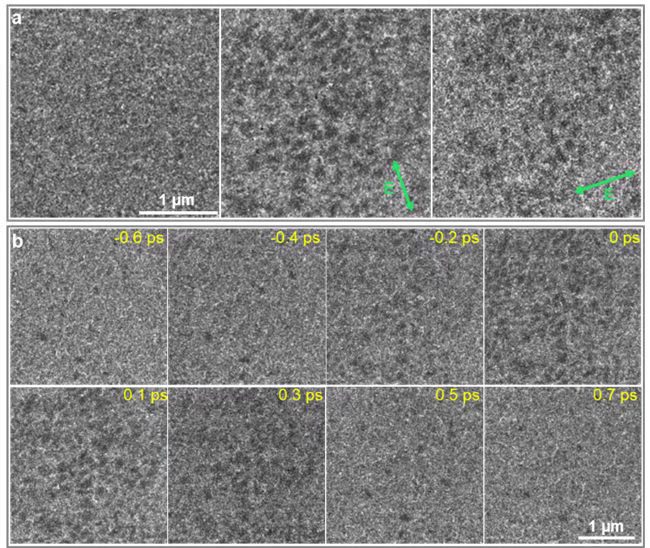