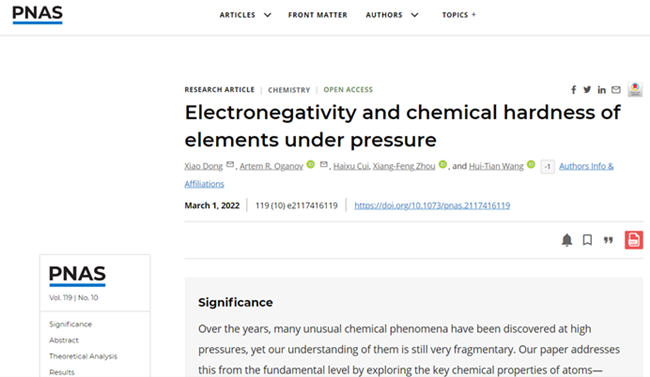 The research group led by Associate Professor Dong Xiao from the School of Physics of Nankai University, the research group led by Professor Artem R. Oganov from Skolkovo Institute of Science and Technology in Russia, and along with other collaborators have spent nearly ten years studying the change trends of the chemical properties of the elements under pressure. Recently, they published a research paper titled "Electronegativity and chemical hardness of elements under pressure" on the PNAS (Proc. Natl. Aca. Sci. 119, 2117416119 (2022)).

Based on the previous research, Dong Xiao and his research team used the first-principle calculation combined with the "charged helium matrix" method developed by their team to reveal the change trends of electronegativity and chemical hardness of 96 elements, from H to Cm, along with pressure within 500 GPa. The research shows that pressure can significantly change the electronegativity and chemical hardness of elements. Contrary to previous understanding, pressure can change the chemical properties of elements by changing the functional relationship between chemical potential and electric charge.

The results of the study by Dong Xiao and his research team show that, with the increase of pressure, the electronegativity and chemical hardness of the elements will change significantly, which leads to the rearrangement of the chemical properties of the elements. For example, Cs is the most reductive element under atmospheric pressure, but the most reductive element becomes Na due to the orbital recombination caused by pressure.

Changes in electronegativity of elements from 0 GPa to 500 Gpa