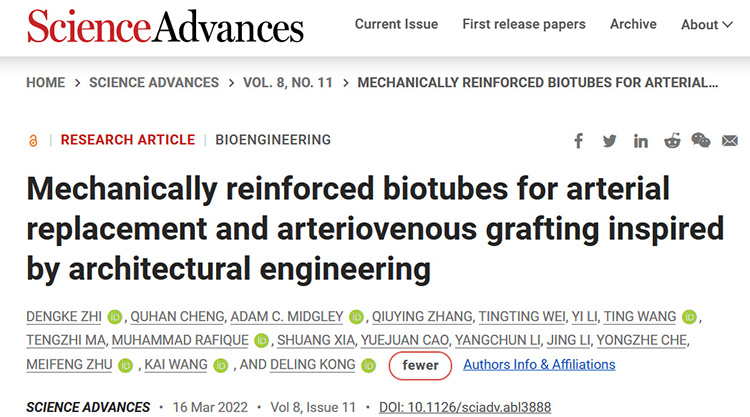 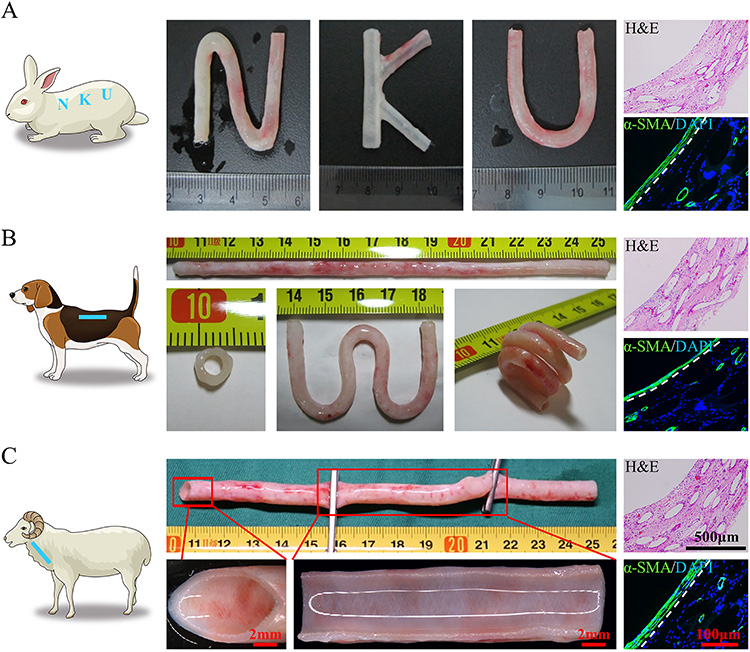 The excellent mechanical properties of PB are also shown in the fact that its original appearance and structure can be maintained after common operations such as coiling, folding, twisting and clamping. In addition, PB can also be individualized in rabbits, dogs and sheep to meet the demands of vascular transplantation in different sites and shapes (Fig. 2). 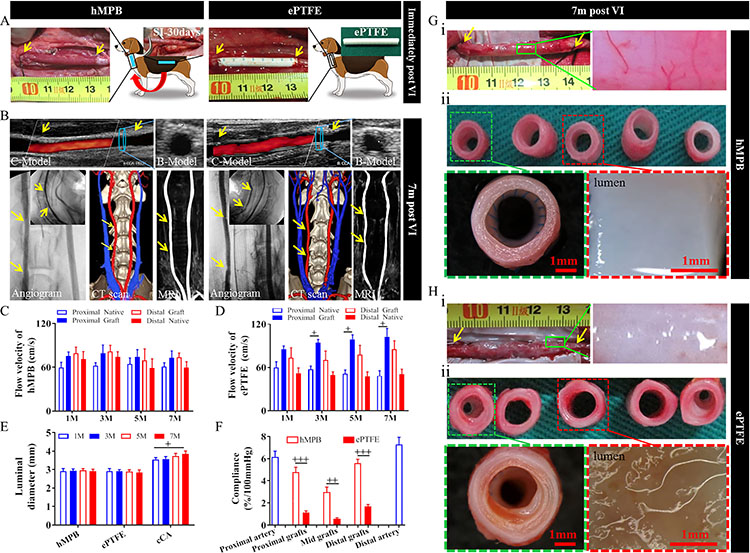 In the research, the team first studied the structure-activity relationship among skeleton structures, vascular mechanics and vascular regeneration systematically through in vitro mechanical tests and abdominal aorta transplantation in rats, and determined the optimal structure of polymer fiber skeleton. The team made a long-term transplantation of canine carotid artery in large animals with the optimal PB (Fig.3) taking the imported ePTFE vascular products as the control group. Although both blood vessels maintained 100% patency rate 7 months after transplantation, PB blood vessels were significantly better than ePTFE blood vessels in terms of endothelialization, smooth muscle regeneration, ECM remodeling and vascular compliance. More importantly, PB blood vessels can have a contraction and diastolic response to the stimulation of acetylcholine and adrenaline 7 months after transplantation, revealing that PB has become “living blood vessels” in large animals. However, ePTFE blood vessels didn’t reveal endothelialization or any systolic and diastolic functions. 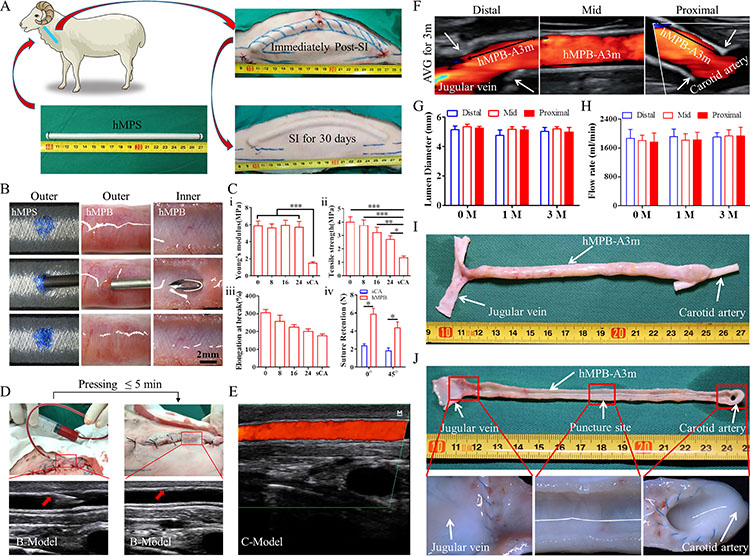 To verify the safety and efficacy of PB in vascular access for hemodialysis, the team used the sheep arteriovenous gastrostomy (AVG) model (Fig. 4). The experimental results showed the good puncture closure performance of PB, which can realize immediate puncture after implantation. In the three-month experiment, PB has realized good vessel regeneration as well as effective integration with subcutaneous tissues, without the common infection in vascular dialysis.

To sum up, the polymer fiber skeleton reinforced biotubes prepared by the team revealed good patency, regeneration, functionality and puncture resistance in the animal experiments of vascular transplantation. In the long-term canine transplantation experiments, the regenerated vascular tissues displayed the physiologic functions similar to the natural arteries. This study has provided an effective means for fixing the problem of insufficient mechanical properties of in vivo engineered blood vessels and thus created an excellent small-diameter engineering blood vessels. Based on such technology, the team is under the transformation of scientific research achievements, with the expectation of new products to fill the gaps at home and abroad.

Professor Kong Deling, associate researcher Wang Kai and researcher Zhu Meifeng from College of Life Sciences and the State Key Laboratory of Medicinal Chemical Biology of Nankai University are the co-corresponding authors of the paper, and postdoctor Zhi Dengke of Nankai University is the first author. This research has been supported by the National Natural Science Foundation of China, and the Chinese invention patent applied based on the core technology in the study has been authorized.