Professor Li Lei from the College of Life Sciences, Nankai University (NKU) has worked with six international research teams including Professor Harvey Millar from the University of Western Australia and Professor Barry Pogson from the Australian National University to systematically analyze the protein turnover of the model plant Arabidopsis in response to the high light stress by using the protein mass spectrometry analysis platform and discovered the new regulation mechanism of the protein homeostasis (proteostasis) under photodamage. The research and its breakthrough have been published online in the Proceedings of the National Academy of Sciences (PNAS), an international authoritative academic journal.

Professor Li’s research team has created a protein mass spectrometry platform for protein turnover rate determination based on stable isotope 13CO2 labeling and found that high light can lead to faster protein turnover of more than 70 proteins, including D1. Through multi-omics analysis, the team has discovered the protease expression activated by the high light and the rapid enrichment of amino acids from the protein degradation, confirming that the high light can trigger extensive protein degradation. The study indicates that although proteins are rapidly degraded under photodamage, the encoding genes of most proteins are activated into expression by the high light with no significant changes in the abundance of proteins, while only a few are not activated with a degradation in the protein and become the target for photodamage.

The discovery solves the biological problem that gene expression is significantly activated while protein homeostasis is maintained, which has long puzzled biologists. The study has clarified that high light-activated expression of the encoding genes of the photosynthetic protease is used to repair the protein degradation, rather than improving its abundance. The nuclear-encoded genes of the protein in the chloroplast, the organelle for photosynthesis, can demonstrate a rapid transcriptional response to the photodamage. In contrast, chloroplast-encoded genes do not respond to high light at the transcriptional level and they rely on post-transcriptional controls to manage the protein degradation caused by photodamage. The study has revealed the cascade reactions where the high light activates the metabolic flux which then drives a faster turnover of proteins. The newly discovered photodamaged proteins that cannot be repaired by plants themselves will become important target proteins, laying the foundation for the future application research on how to steadily improve photosynthesis efficiency. 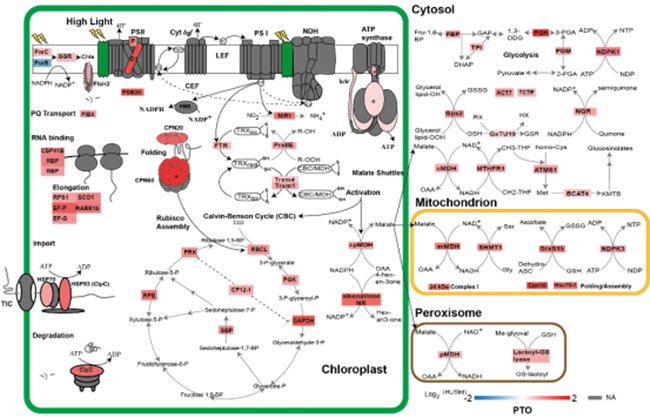 Professor Li Lei from the College of Life Sciences, NKU is the first and co-corresponding author of this paper. The project was supported by the National Natural Science Foundation of China, Tianjin Municipal Science and Technology Bureau and NKU Interdisciplinary Research Center for Cell Responses.