On May 22, Nankai University and the SCOLAR Network jointly organized the Second Nankai University "Model SCO" online with the theme of "Building an Integrated Ecosystem of Digital and Traditional Economies Within the SCO Region". Zhang Ning, Deputy Director of the Office of International Affairs of Nankai University, and Victoria Khu, Chair of SCOLAR Network, delivered opening speeches at the event. A total of 24 Nankai students from six schools covering 14 majors participated. 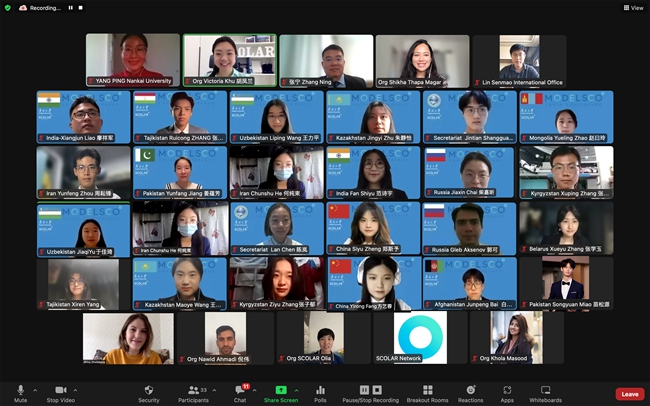 The students took the roles of the delegates of the eight member states and four observer states of the Shanghai Cooperation Organization (SCO). After discussions held by the state assuming the rotating presidency, reading out of position papers, free discussions, proposal of amendments, voting, and the rewriting of key points, the students wrote and issued a joint declaration. And awards of "Best Delegate", "Best Position Paper" and "Best Performer" were presented according to the votes of the participants.

The SCO is a permanent intergovernmental international organization founded in Shanghai in 2001. As the world's largest transregional organization in terms of land area and population, the SCO has become a multilateral cooperation platform with greatest development potential in the new century.