Recently, two research teams led by Prof. Zhang Tao and Prof. Wu Shi’an from the College of Life Sciences, Nankai University, collaborated to publish a paper titled "MST1 Mediates Neuronal Loss and Cognitive Deficits: A Novel Therapeutic Target for Alzheimer's Disease" on the online journal of Progress in Neurobiology, whose findings for the first time suggest that MST1-mediated synapse loss is an essential mechanism of cognitive deficits and neuronal loss for Alzheimer's disease (AD) and could be a new therapeutical target for its treatment. Postdoctoral fellow Wang Hui and doctoral student Shang Yingchun and Wang Enlin from the College of Life Sciences are the first authors for the paper. 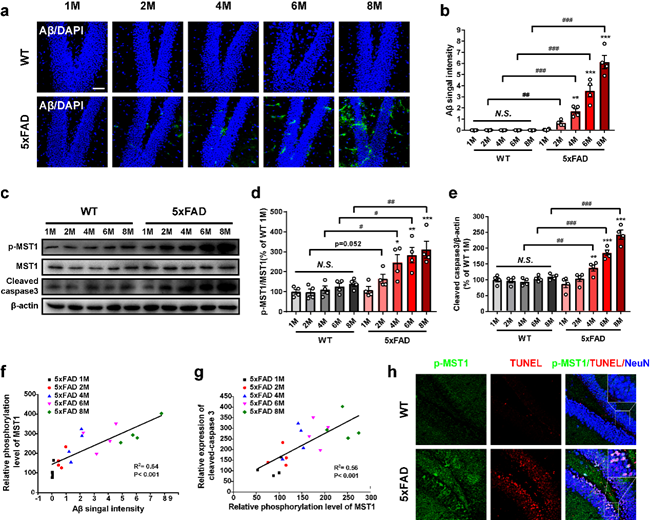 The joint research team firstly found that activity of MST1 was increased with Aβ accumulation and neuronal loss in hippocampus of 5xFAD mice. A further study found the colocalization of substantial neuronal apoptosis and p-MST1 (T183) in 6-month-old 5xFAD mice, and it indicates that MST1 plays an important role in neuronal apoptosis in 5xFAD mice (see Figure 1 for more details).

The activated MST1 mediates synapse loss and neuronal apoptosis when AD progresses, while Aβ promotes the activation of MST1 (see Figure 2 for more details). After a single injection of AAV2/9-GFP-shMST1 to the dentate gyrus (DG) region of the hippocampus, it is found that with the knocking down of MST1, cognitive deficits, synaptic plasticity, dendritic spine formation and synapse-association proteins in 7-month-old 5xFAD mice are significantly improved and the neuronal apoptosis is largely reduced. 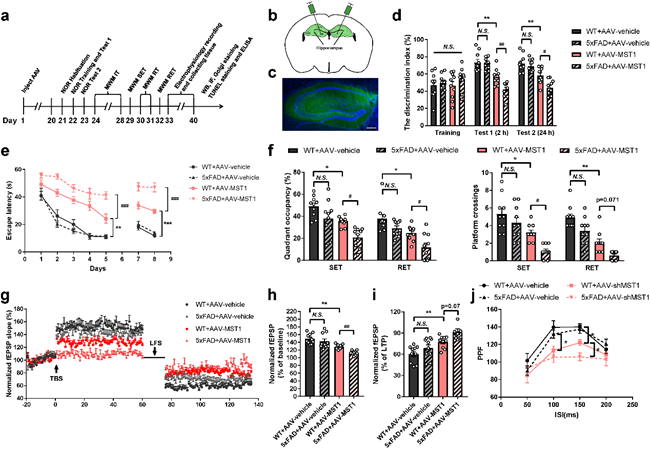 The team hopes to discover how MST1 mediates neuronal apoptosis during AD progression in further studies. It is found that there is an interaction between p53 and MST1 by using co-immunoprecipitation and mass spectrometry (IP-MS) and the interaction is mediated by MST1 kinase activity with cell experiments. In the meantime, the p-p53 in PC-12 cells increases along with MST1 and Aβ increase, which suggests Aβ could induce neuronal cell death by accelerating MST1-promoted phosphorylation of p53. To study the role of p53 in the MST1 activation induced cognitive impairment, the team caused overexpression of MST1 by injecting adeno-associated virus (AAV) to the DG region of the hippocampus of 2th-month-old p53+/+ or p53-/- mice. The results showed that cognitive decline caused by overexpression of MST1 can be significantly improved by p53 knockout (see Figure 3 for more details). 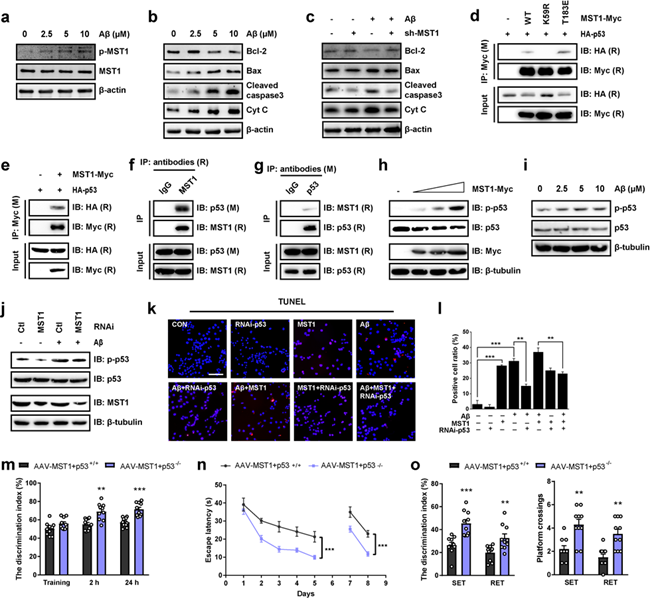 The team also further explored whether MST1 can be a novel therapeutic target for AD. After a month of administering XMU-MP-1, the small-molecular inhibitor of MST1, to 6-month-old mice by nasal administration, they found that XMU-MP-1 can significantly inhibit the activation of MST1 and improve AD phenotypes in 5xFAD mice and p53 activation.