Bacterial meningitis is one of the top ten causes of infection-related deaths worldwide which has high rates of morbidity and mortality in newborns and the elderly. Neonatal meningitis-causing Escherichia coli (NMEC) is the leading cause of meningitis in newborns worldwide. The brain was long regarded as a highly immune­privileged site which would benefits for bacterial survival once they invade in the brain. However, recent studies showed that some cells in brain, including microglia and astrocytes, have immune surveillance function. The analysis on the molecular mechanism by which NMEC escapes from anti-bacterial activity of the immune system is one of the hot research areas in the current research, and it is of great significance for the prevention and treatment of bacterial meningitis.

A recently collaborative study involving Nankai University and Johns Hopkins University reveals the molecular mechanism by which NMEC evades immune surveillance to promote bacterial survival in the brain. The research results were titled "Bacteria reduce flagellin synthesis to evade microglia-astrocyte-driven immunity in the brain" and published at "Cell Reports" online. Professor Wang Lei (TEDA Institute of Biological Sciences and Biotechnology, Nankai University) is the corresponding author of this paper. 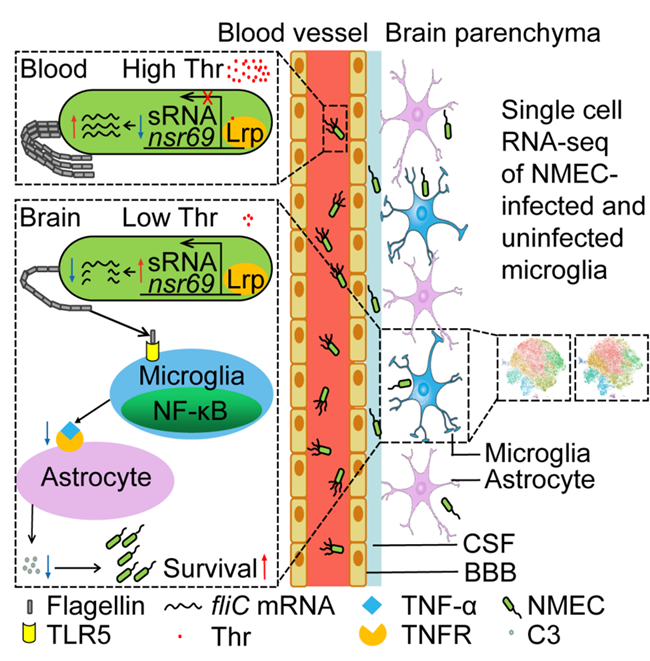 Using single-cell RNA sequencing and transcriptome comparative analysis, combined with a large number of biological experiments, the research team discovered that NMEC senses low concentration of threonine in cerebrospinal fluid (CSF) to down-modulate the expression of flagellin via a sRNA nsr69. The reduction of flagellin synthesis inhibits the microglial activation and secretion of TNFα, which decreases C3 production by astrocytes. The low level of C3 production directly promotes NMEC survival in CSF. This study provides further insights into the pathogenesis of NMEC and the host-pathogen interaction.

This research is funded by National Key Programs for Infectious Diseases of China and National Natural Science Foundation of China.