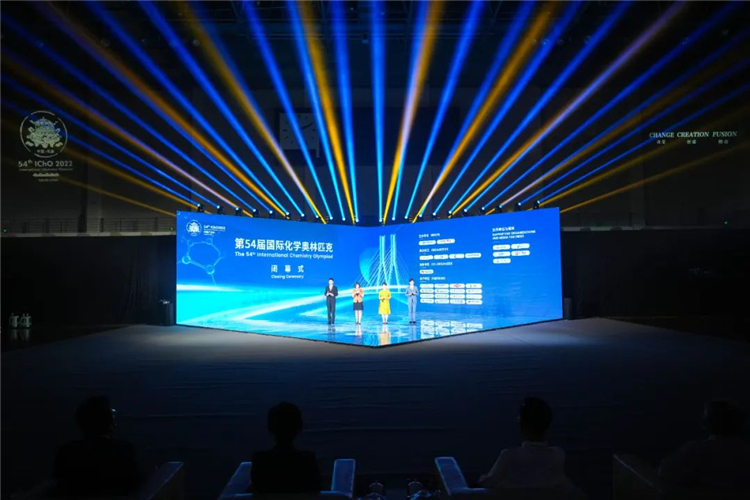 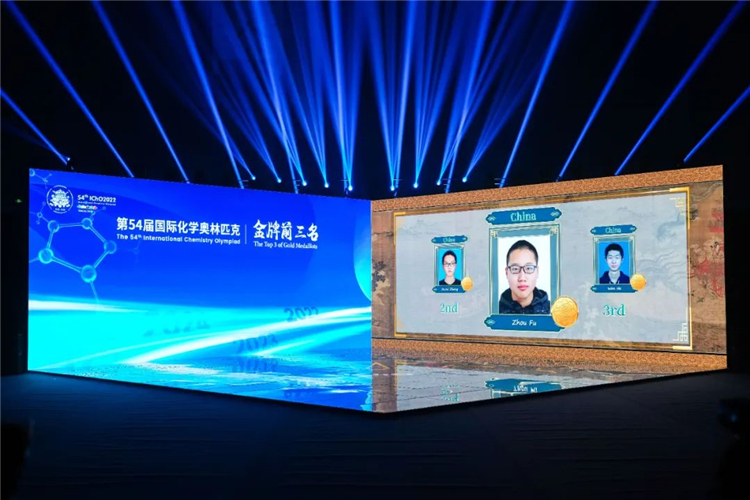 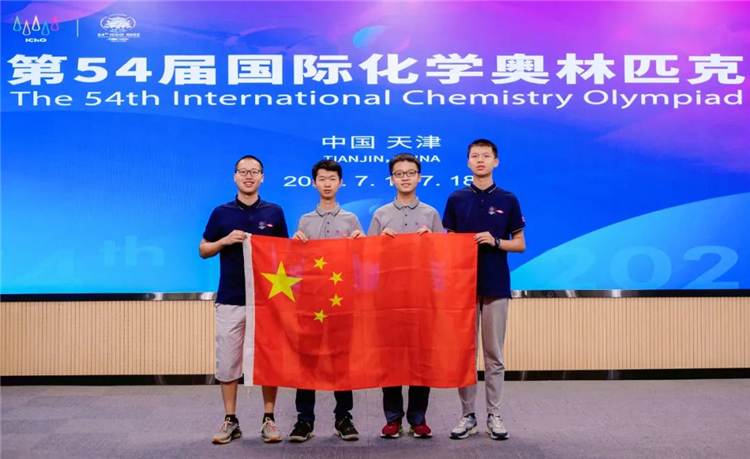 Co-hosted by the China Association for Science and Technology (CAST) and the Tianjin Municipal People's Government, and co-organised by Nankai University, the Chinese Chemical Society, the Children and Youth Science Center of the CAST and the Tianjin Association for Science and Technology, this year's event, with the slogan "Change, Creation, Fusion", is aimed to improve tech for good, promote openness and inclusiveness, encourage innovation and  creativity and stimulate scientific interest. 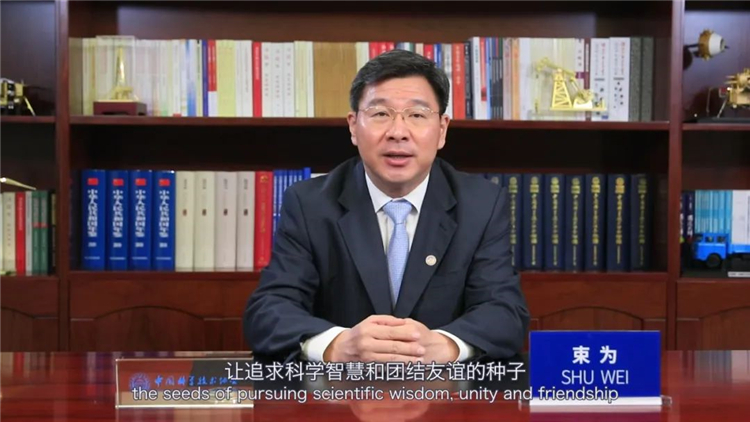 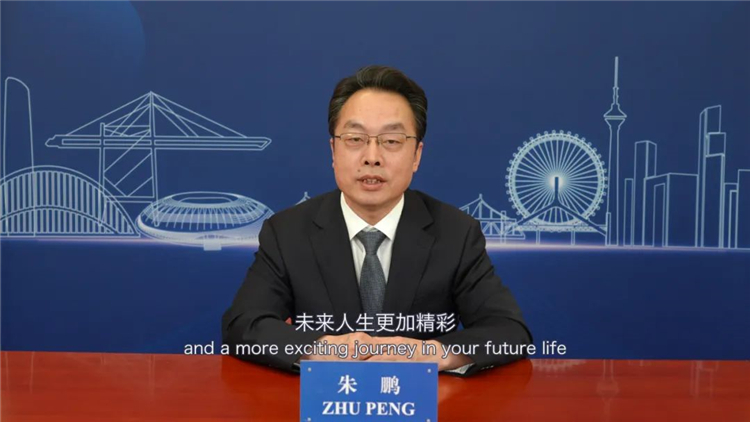 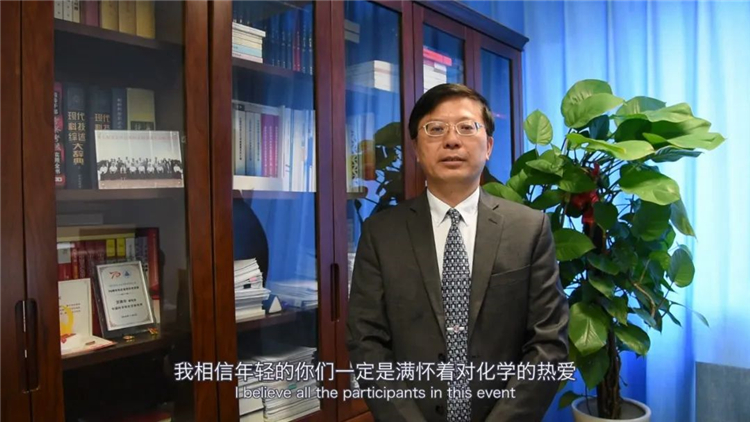 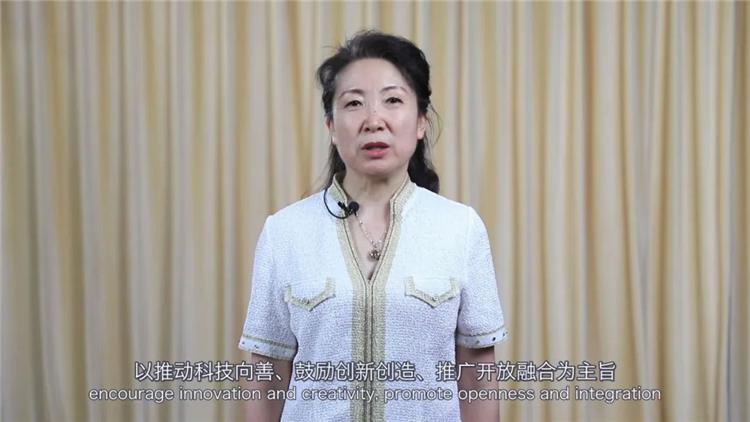 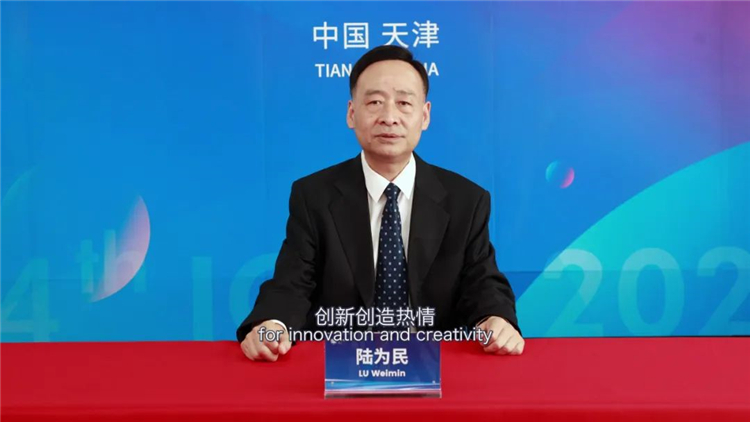 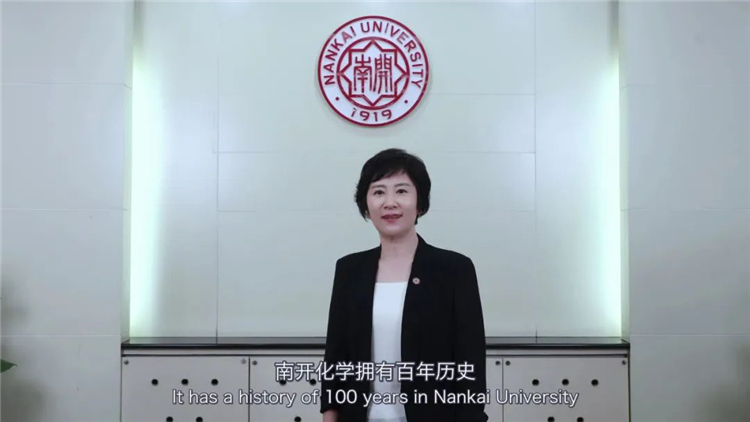 At 18:00 on July 18th, the closing ceremony of the IChO 2022 was held at Nankai University Sports Center. Shu Wei, Executive Secretary of the China Association for Science and Technology(CAST), Zhu Peng, Vice Mayor of Tianjin, Fan Qinghua, Secretary General of the Chinese Chemical Society, Xin Bing, Director of the Children and Youth Science Center of the CAST, Lu Weimin, Deputy Director of the 54th International Chemistry Olympiad Organizing Committee and Executive Vice Chairman of the Tianjin Association for Science and Technology, and Yang Kexin, Vice Chair of of Nankai University Council, presented awards and extended congratulations to the medallists and award winners.

The 54th IChO was held in the form of a theoretical exam, covering inorganic chemistry, organic chemistry, physical chemistry, structural chemistry, and analytical chemistry. The nine exam questions were selected from major events related to human life and health, as well as economic and social development, including the rapid nucleic acid test for the novel coronavirus that is demanded urgently in the world, the key energy storage materials supporting the national strategic carbon peaking and carbon neutrality goals, protein synthesis and modification that helps explore the mysteries of life, and the synthetic chiral spiral ring catalysts design to improve the efficiency of chiral molecular synthesis. 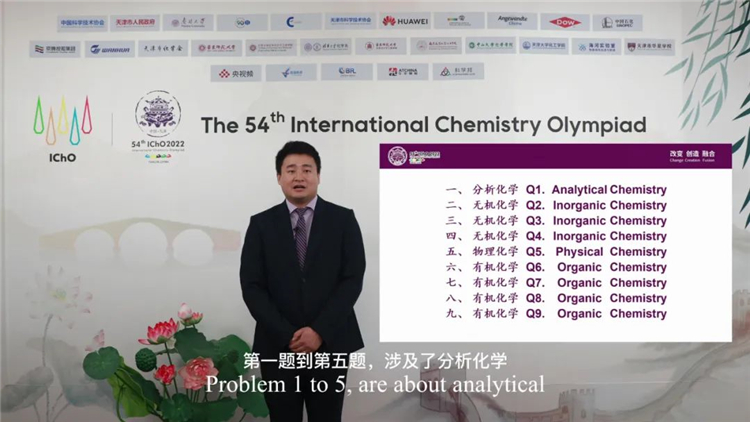 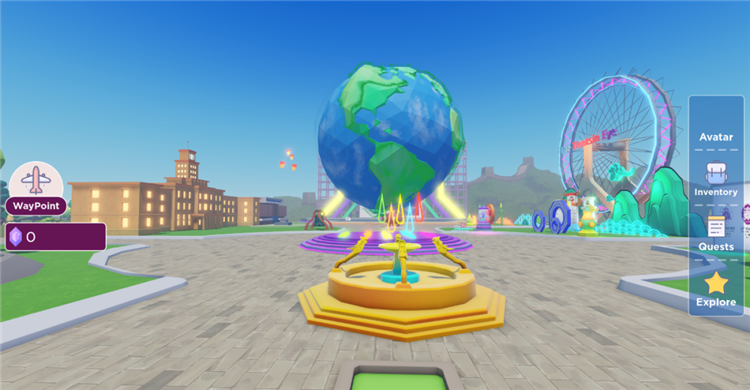 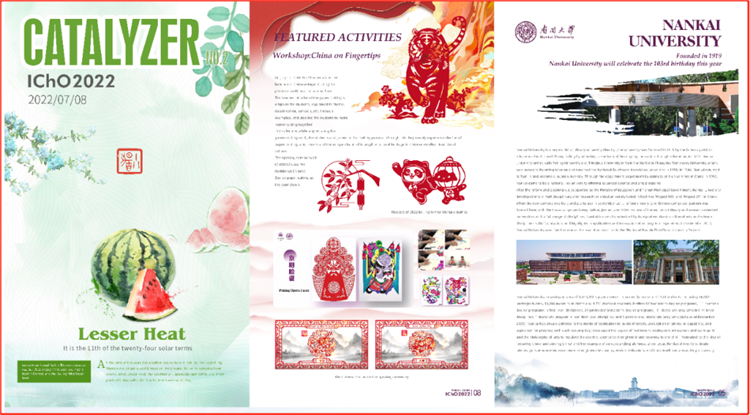 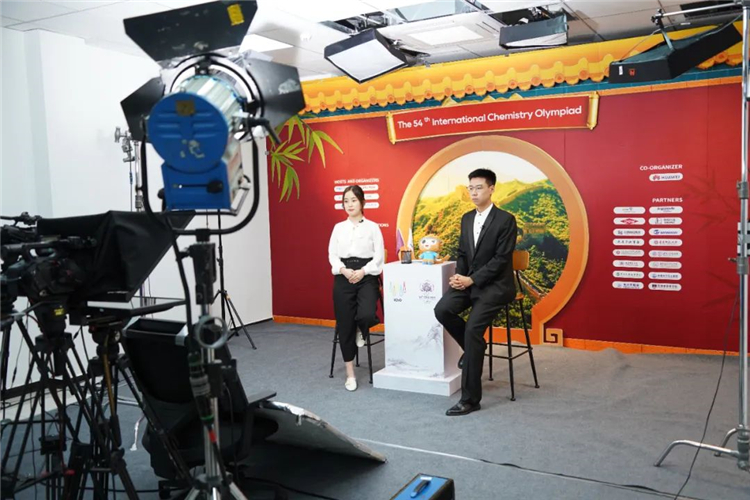 The closing ceremony was filled with a strong atmosphere of Chinese and Western cultural fusion. 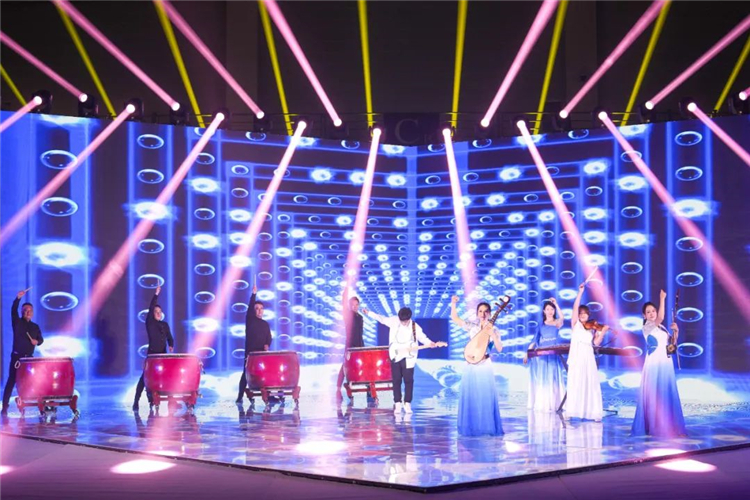 Accompanied by the cheerful and passionate melody of "Drum Music for Five Continents", the Chinese artists performed enthusiastically with different percussion instruments and a variety of Chinese and Western orchestral instruments at Nankai University, the host of this event,  conveying the message that the young chemistry talents from five continents "gathering in Nankai online to participate in the grand event, with chemistry as the medium". 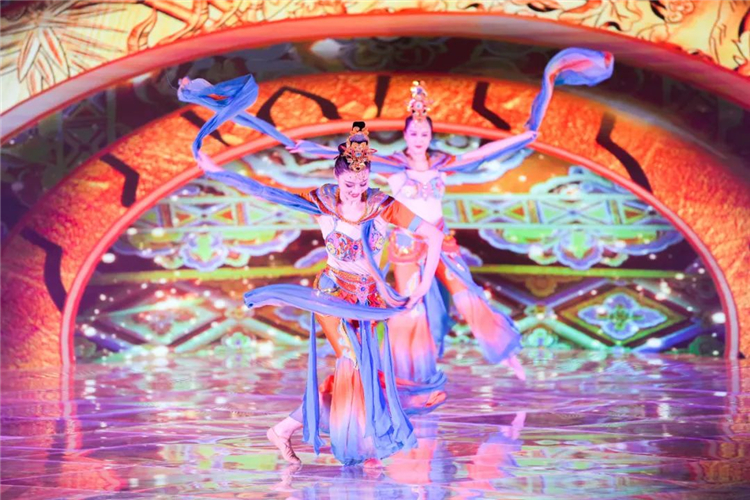 "Heart Swaying with Huxuan Dance", a duo dance with characteristics of the Western Regions of the country, guided the audience to travel to the past and experience diversified cultures and rich history fostered along the age-old Silk Road in promoting cultural exchanges between the West and the East. 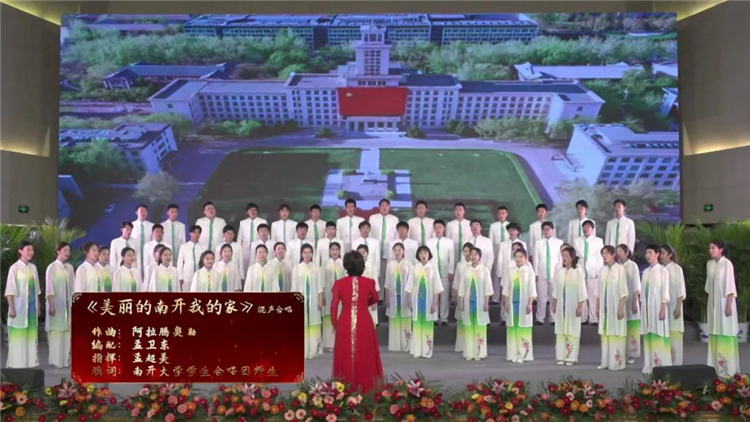 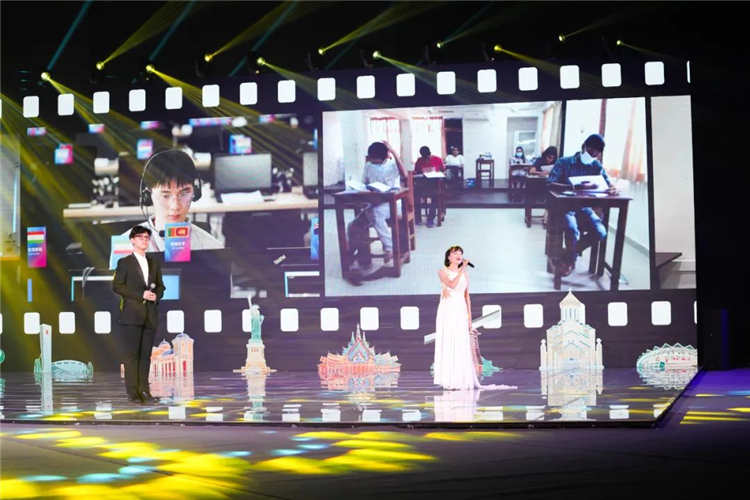 On the evening, the Nankai University Student Choir, which has won many gold medals in world choral competitions, sang "Nankai University, My Beautiful Home", an adapted song, and "You and Me", the theme song of the 2008 Beijing Olympic Games, conveying the message that NKU stands ready to join hands with young people across the world for a better future with chemistry. 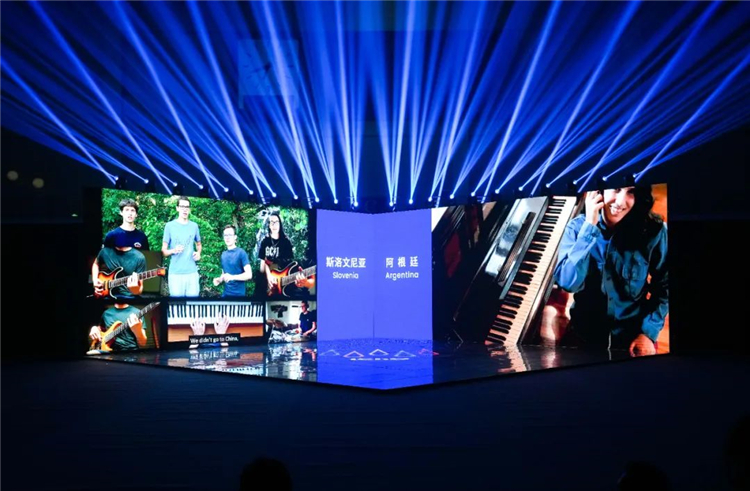 A mixed performance by the contestants demonstrated the vigor and passion of different countries and regions. 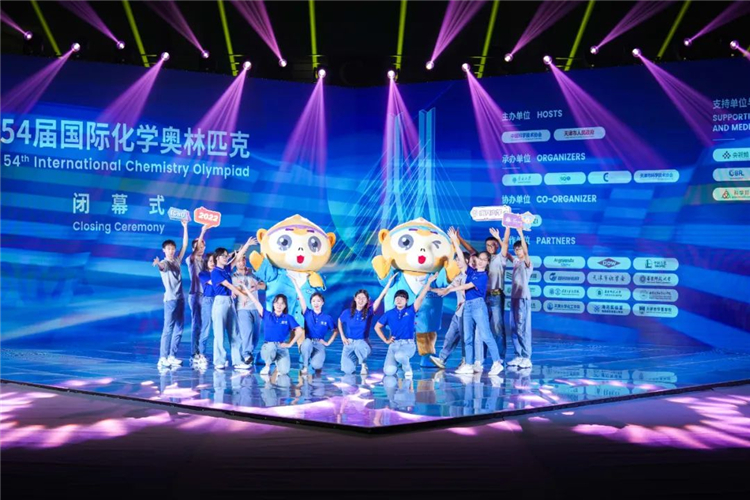 During the gala, volunteer representatives from Nankai University performed a dance titled "Try Everything" to pay tribute to those young people who forge ahead bravely in exploring science and their fearless youth. 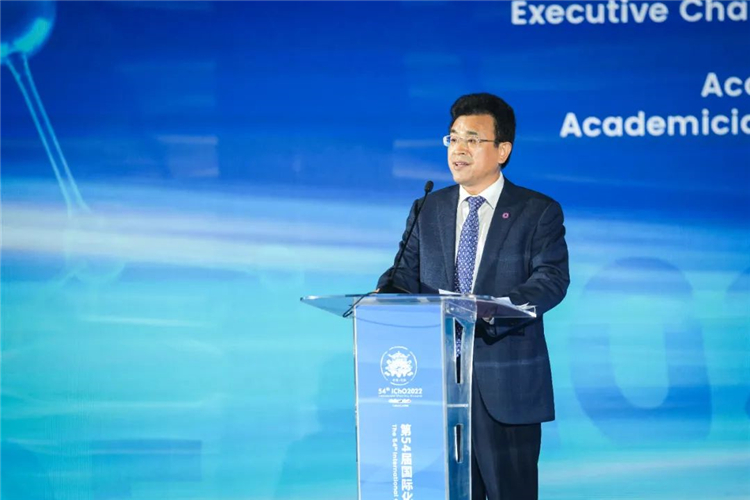 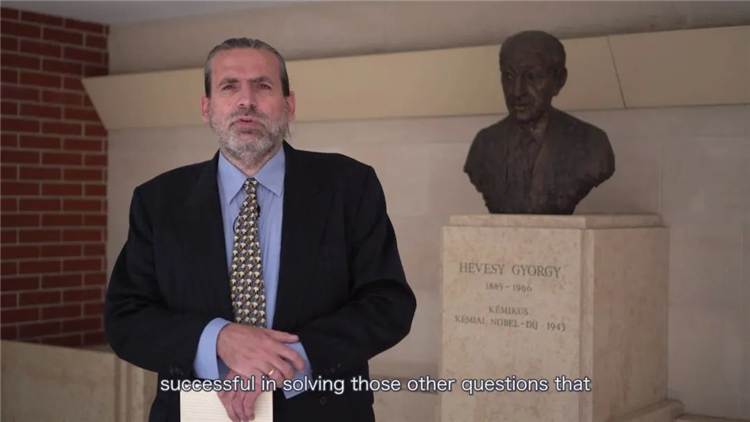 In a video message, Gábor Magyarfalvi, Chairman of the International Chemistry Olympiad Steering Committee, expressed his gratitude to the organizers of the event and to all those who have contributed to the success of the event, and congratulated all the participating students and winners. 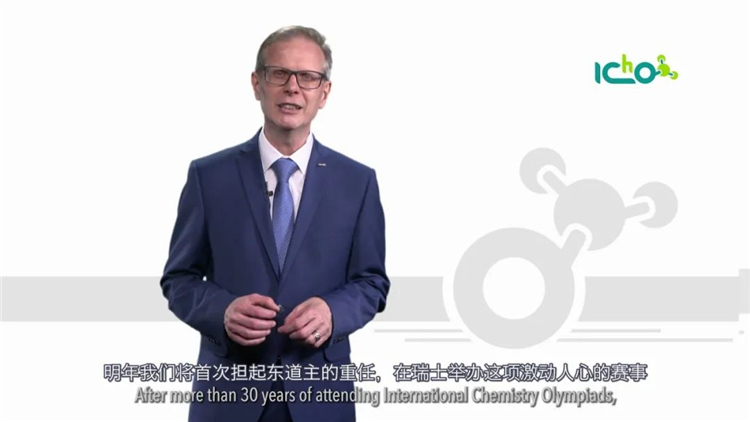 On behalf of the 55th International Chemistry Olympiad Organizing Committee, Günther Dissertori, Rector of ETH Zurich and President of the 2023 International Chemistry Olympiad, extended a cordial invitation to all young students, mentors, observers and guests who are passionate about chemistry, saying that he looks forward to seeing them in Zurich, Switzerland in 2023. 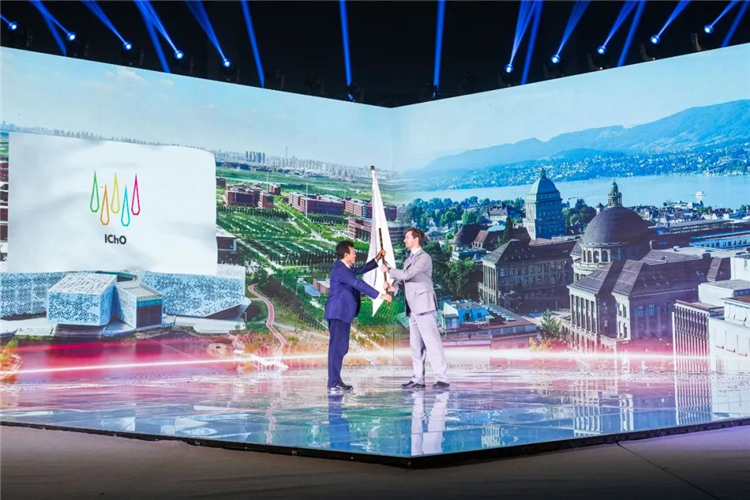 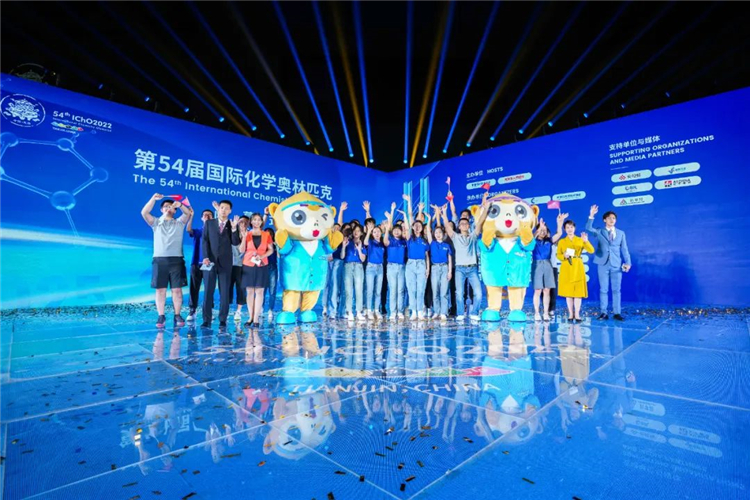 The 54th International Chemistry Olympiad came to a successful conclusion. Farewell Tianjin! We will meet in Zurich in 2023!