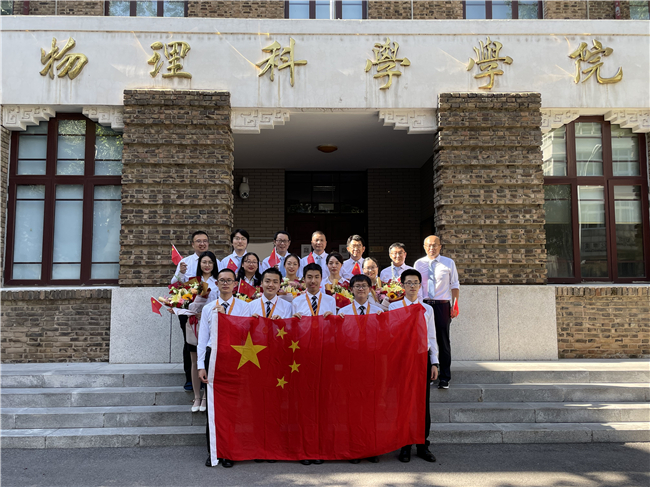 The School of Physics of Nankai University led the Chinese team to participate in the 52nd International Physics Olympiad (IPhO) from July 10 to 17. The five members of the Chinese team, Xu Guowei, Yang Mingxuan, Liu Zirui, Li Qiancheng and Ren Yuqi, swept the gold medals, and won the top five places, putting the team first in the rankings. At the same time, Xu Guowei, Li Qiancheng and Yang Mingxuan won the first place in terms of overall score, theory test and experiment, respectively.

The competition is hosted by Switzerland. The competition is held online, and the experiment exam takes the form of online virtual exam for the first time. The competition attracted a total of 718 participants from 75 countries and regions, including 368 students, 145 team leaders, 67 observers and 138 invigilators. It is reported that the grading and scoring of the competition was performed by the volunteers invited worldwide by the organizing committee. IPhO2022 consists of experiment and theory tests, and each part lasts 5 hours. The theory part has 3 major questions, and the experiment has 2 major questions, with a total of 50 points. The Chinese team achieved impressive performance with a total score of 212.3 points and an average score of 42.46 points.

The Chinese team was led by Song Feng and Wang Jin from the School of Physics of Nankai University. More than 40 faculties were involved in the theoretical and experimental training. During the competition, each question was translated one day before and all the participating faculties fully observed the rules of examination and confidentiality. They worked an average of 16 hours per session to ensure the smooth progress of the exams. So far, the faculty team of Nankai University has undertaken the tasks of selecting and training national teams and arranging their participation in the IPHO and APHO in 2013-2016, 2018 and 2022.