On August 16, the team of Professor Zhu Yushan and Professor Chen Quan  from Nankai University College of Life Sciences, State Key Laboratory of Medicinal Chemical Biology, and Interdisciplinary Science Center for Cell Response, published a paper entitled Nondegradable Ubiquitinated ATG9A Organizes Golgi Integrity and Dynamics Upon Stresses on Cell Reports. The study discovered how the ubiquitinated ATG9A protein participates in the molecular mechanism of regulating the dynamics and functions of the Golgi under high temperature stress conditions, expanding the understanding of the new non-canonical autophagy functions of ATG9A.

The authors found that high temperature stimulation caused fragmentation of the Golgi, and ATG9A-containing membrane vesicles were dispersed and transported from the trans-Golgi to the cytoplasm. By using ATG9A knockout cell lines, combined with immunofluorescence technology and transmission electron microscopy, it was found that the knockout of ATG9A significantly inhibited the fragmentation of the Golgi apparatus caused by high temperature, and after re-expression of wild-type ATG9A, the phenomenon got restored. It suggested that ATG9A plays a very important role in the process of high temperature-induced Golgi fragmentation. Mechanistic analysis found that the E3 ubiquitin-protein ligase MARCH9 can ubiquitinate ATG9A at K63 under high temperature conditions. ATG9A then interacted with the protein GRASP55 that maintains the Golgi lamella structure, which inhibited the oligomerization of GRASP55 and the connections of GRASP55 with Golgi lamella, eventually leading to Golgi fragmentation. The functional analysis revealed that Golgi fragmentation is actually a kind of Golgi stress response mode; and the morphological changes will affect the basic functions of Golgi including its inhibition of protein glycosylation modification and protein sorting process. 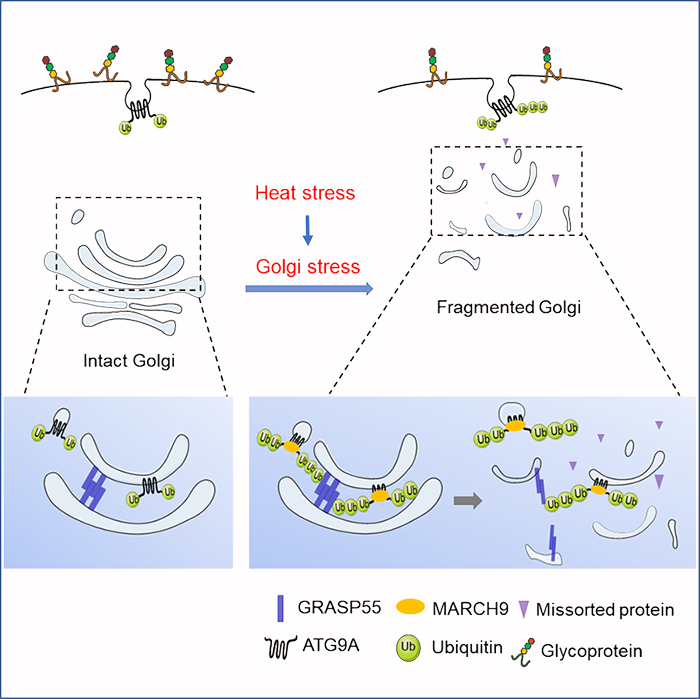 Figure: MARCH9 ubiquitinated ATG9A regulates the structure and function of the Golgi under stress

In sum, the study found that changes in the level of ubiquitination of ATG9A regulate the process of Golgi fragmentation. The specific mechanism by which high temperature affects the morphological structure of the Golgi was revealed in the study, and a new non-autophagic function of ATG9A was discovered as well. Therefore, the study provides a theoretical reference for studying the functional changes of the Golgi under stress, and applying the dynamic regulation mechanism of the Golgi and the function of ATG9A to the treatment of neurodegenerative diseases.

Luo Qian, a doctoral student at NKU College of Life Sciences, is the first author of this paper with Professor Zhu Yushan and Professor Chen Quan being the co-corresponding authors. The team of Professor Pan Leiting from NKU School of Physics has provided technical support for the analysis of the localization of ATG9A and GRASP55 with super-resolution microscopy.